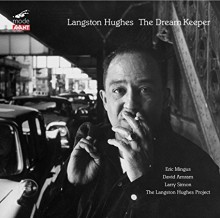 There have been many recordings featuring the works of the great Harlem Renaissance poet Langston Hughes (1902-67), including Hughes’ own spoken word recordings, some with musical accompaniment. Perhaps the most well-known is the 1958 MGM release Weary Blues, featuring Hughes reciting his poetry over a jazz soundtrack composed and arranged by Leonard Feather and Charles Mingus. A more recent offering was Laura Karpman’s GRAMMY Award winning Ask Your Mama, featuring her original musical setting of Hughes’ epic poem Ask Your Mama: 12 Pieces for Jazz.

Langston Hughes: The Dream Keeper is more closely related to the aforementioned 1958 recording in more ways than one. Not only does it combine poetry with jazz, but the narrator is none other than Eric Mingus, the son of Charles Mingus. The younger Mingus, a prominent jazz bassist and vocalist, utilizes these talents to full effect while performing Hughes’ poetry. The music was arranged and directed by jazz guitarist Larry Simon, who founded the popular Beat Night series in New York as well as the JazzMouth festival in Portsmouth, New Hampshire, to promote music and spoken word collaborations. Also contributing to the project is noted composer/conductor David Amram, who played with Charles Mingus, pioneered the first-ever public Jazz/Poetry reading in NYC with Jack Kerouac, and collaborated with Langston Hughes on the cantata, Let Us Remember, where he learned about Hughes’ own forays into jazz-poetry. When these three musicians (Simon, Amram and Eric Mingus) came together at one of the Jazzmouth festivals, they were easily sold on Simon’s idea “of making a CD honoring the poetry and the life of Langston Hughes,” and worked diligently to “honor every word that we heard and every musician with whom we [had] played.”

The Dream Keeper opens with a new rendition of “Weary Blues,” accompanied by Amram on piano, with Mingus alternating between recitation and singing as suggested by the lyrics:

In a deep song voice with a melancholy tone
I heard that Negro sing, that old piano moan—
“Ain’t got nobody in all this world / Ain’t got nobody but ma self.
I’s gwine to quit ma frownin’/ And put ma troubles on the shelf.”

The full ensemble enters on “The Dream Keeper,” which maintains a bluesy, otherworldly feel accentuated by a Native American flute in this primarily instrumental track. Mingus is accompanied on half the tracks by a solo instrument—usually Amram on piano, while “Border Line” features Simon on guitar and “Railroad Avenue” features Gallant on Hammond organ. This serves to keep the focus on the texts, without overshadowing the power of the spoken word. The larger ensemble performs on the haunting “Daybreak in Alabama,” the grooving “In Time of Silver Rain,” and the timely “Democracy,” performed in the style of Gil Scott-Heron, using strong exclamations over a highly distorted, freestyle background. The album concludes on an optimistic note with “Life is Fine,” alternately sung and spoken by Mingus.

The Dream Keeper was recorded in 2012 towards the end of Barack Obama’s first term as POTUS, and released just prior to Donald Trump’s inauguration. If released just a few weeks later, I wonder if Simon would have changed the order of the tracks to end with “Democracy,” the opening lines of which read: “Democracy will not come / Today, this year / Nor ever / Through compromise and fear.” In any case, this is a first rate project. I might even suggest that Mingus’s heartfelt delivery, with its soulful timbre and nuanced rhythms, is even more impactful than the recordings made by Langston Hughes. To use a phrase from Amram, Eric Mingus knows how to realize and pay homage to “the music that is already in the spoken word.” Highly recommended!