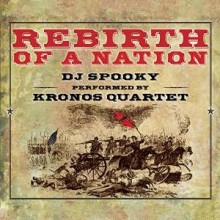 Title: Rebirth of a Nation

Rebirth of a Nation was DJ Spooky’s (i.e. Paul D. Miller’s) first large scale multimedia piece, made in collaboration with the Kronos Quartet and premiered in 2004 at the Lincoln Center Festival, Spoleto Festival USA, Weiner Festwochen, and the Festival d’Automne á Paris. It has since been given some fifty times as a live performance, and the studio recording of the soundtrack heard here was made in 2007, but this combined CD/DVD release from Cantaloupe Music marks the first time the full musical score has been available as a separate entity. The film Rebirth of a Nation is a re-imagining, or “remix,” of D.W. Griffith’s notorious 1915 feature The Birth of a Nation, which—with apologies to Al Gore—truly may be the most ‘inconvenient truth’ in the history of cinema. The radical cinematic style, three-hour running time, sense of grandeur and the relentless publicity machine that fueled The Birth of a Nation’s prosperity spelled doom to the lowly Nickelodeon and paved the way for ambitious film epics of all kinds, and American film history cannot dispense with it. But its corrigenda of the Ku Klux Klan as the salvation of the American South in the post-Civil war period, and its vilification of African Americans, helped to revive a sleeping Klan into a new round of vigilantism that flourished into the early 1920s. Although Griffith’s centennial was widely observed and celebrated in 1975, in the years to follow screenings of The Birth of a Nation were picketed and often cancelled, and Griffith’s name was removed from the Director’s Guild of America’s Award in 1999.

Shutting down screenings of The Birth of a Nation doesn’t make the film go away, and suppressing it only prevents younger generations from seeing how prevalent and mainstream white supremacy was a century ago. DJ Spooky feels that some of the complex, painful and malevolent themes in The Birth of Nation still connect with America as it is in the twenty-first century, and utilizes digital editing, graphics, inserts, narration and a hip hop music track to render the hundred-year-old film into a commentary on itself. Collaborating with the Kronos Quartet, DJ Spooky’s work has a strongly post-classical feel and largely avoids nostalgic gestures that would normally play to the subject matter, save samples of wailing harmonica and occasional banjo-like pizzicati from Kronos. The character sketches, such as “Stoneman” and “Cameron,” seem the most successful from a purely musical standpoint, as if the persons connected to these names in the film elicited the most involved responses from the composer. Nevertheless it is difficult to appreciate the music without its visuals; some of the pieces are very restrained, and are understated even for film music, which is normally a little under the action. Rebirth of a Nation, the film (2008), runs about half the length of Griffith’s original and even that is a lot of screen time to cover; given that there is narration, but there’s also no direct dialog from the actors—the soundtrack has to be wall-to-wall. Without the visuals, the score comes across as partly inspired and partly padded.

Rebirth of a Nation is nonetheless an interesting investigation into William S. Burroughs’ idea that by cutting something up, you may be able to reveal the truth in it, neutralize it or at least recast it into another context, and there’s every reason to experience this project in the form that Cantaloupe Music has packaged it in; DVD and music, whereas before there was only a downmarket DVD and the music was only available as excepts.