Following are additional albums released during July 2019—some will be reviewed in future issues of Black Grooves. END_OF_DOCUMENT_TOKEN_TO_BE_REPLACED 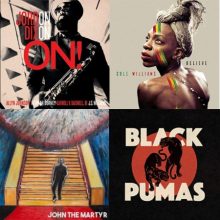 Welcome to the July 2019 Summer Rocks issue of Black Grooves, sponsored by the Indiana University Archives of African American Music and Culture.

This month we’re featuring albums that represent the many permutations of rock, from the Black rock power trio Hundred Watt Heart (ft. “Captain” Kirk Douglas of The Roots) on Turbulent Times, to the three volume 20th Anniversary Mixtapes: Groiddest Schizznits from Burnt Sugar The Arkestra Chamber, to the roots of rock and roll on the Bear Family compilation Little Junior Parker Rocks, to the desert rock of Malian artist Oumar Konate on I Love You Inna, to the rocking zydeco of Dwayne Dopsie on Bon Ton. Also included in this line-up are a slew of debut albums from up and coming bands: Made In Pieces from the UK’s six piece collective Pieces of a Man; self-titled releases from Austin’s Black Pumas and New York rock and soul group John The Martyr; the solo side project Nothing to Say from Alan Evans (Soulive); Believe from self-proclaimed punk empress Cole Williams; Samsara from the Austin band Los Coast; and Cousin From Another Planet from Aaron Whitby featuring Martha Redbone, Lisa Fischer and Tamar Kali.

Jazz releases include the Wayne Wallace Latin Rhythm Jazz Quintet’s The Rhythm of Invention and tenor-saxophonist Jordon Dixon’s On! Our classical pick of the month is pianist-composer Stewart Goodyear’s Gershwin & Goodyear and our gospel pick is Kirk Franklin’s Long Live Love.

Wrapping up this issue is the timely Putumayo compilation World Peace and our list of June 2019 Black Music Releases of Note.