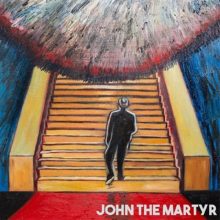 It’s becoming a familiar story: young soul music enthusiast encounters a seasoned elder who hasn’t performed professionally for years, and invites him or her to front a band. In this instance, the band is the ten-piece rock and soul group John the Martyr, and the elder is none other than 70-year-old Harlem soul singer Bill Hudson, who had been earning extra cash performing with a doo-wop group in the New York subway. Now, just two years after their formation, John the Martyr has released its eponymous debut album to wide acclaim. You may have already heard their first single, “Crossing the Line,” which is brimming over with a youthful enthusiasm tempered by the gravitas of Hudson’s vocals that reflect the septuagenarian’s lived experience: END_OF_DOCUMENT_TOKEN_TO_BE_REPLACED