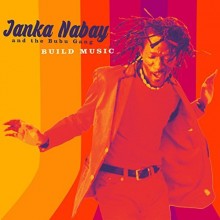 Janka Nabay rose to stardom in his native Sierra Leone during the 1990s for remixing and modernizing Bubu music (traditional music of the Temne people in Sierra Leone). Caught amid the decades-long war there, Nabay immigrated to the United States in 2003. After years of working side jobs and trying to make a life as an artist, in 2010 he crossed paths with filmmaker and scholar Wills Glasspiegel, who had recorded bubu horns. Together, they put together a touring band that eventually recorded and released their debut album En Yah Sah in 2012.

Three years later, Janka Nabay and the Bubu Gang are returning with their sophomore album Build Music. This project reflects the many cultures and contradictions in Nabay’s life. He sings in Sierra Leone’s lingua franca, Krio, as well as his native tribal language Temne, English, and even bits of Arabic. Using traditional recordings and his band’s instrumentals as well as overdubs, loops, and electronic drumbeats, the result is a diversified sound that overturns the notion of static traditions while trying to remain true to the flavor and integrity of bubu music.

Bubu music is most identifiable by West African bamboo horns that the Temne people use in traditional bubu processions in rural areas of Sierra Leone during Ramadan. In the past, Nabay has mimicked the sounds of these horns on Casios. While he does use these keyboard imitations on Build Music, he also directly samples recordings of the horns that Glasspiegel recorded on a 2014 trip to Sierra Leone and includes them on the songs “Angbolieh” and “Santa Monica.”

Build Music’s title reflects the process behind the album, which was slow and intentional. Included are reimagined versions of songs Nabay recorded in Sierra Leone in the 1990s, like “Sabanoh” and “Angbolieh,” as well as tracks such as “Bubu Dub” featuring new vocals sung over original Sierra Leonean rhythms recorded by Nabay’s collaborators.

The diversity present in music styles and languages on the album is also reflected in choice of song topics and themes, which draw upon Nabay’s experiences in Sierra Leone and current incidents related to life as an immigrant in the United States. For example, “Santa Monica” is based on a tense encounter Nabay had with a police officer. These varied themes are a part of his philosophy–namely, that multiple, contradicting realities always coexist. Build Music is an example of this dichotomy, drawing from Nabay’s diverse life experiences yet keeping bubu music at the heart of it all.