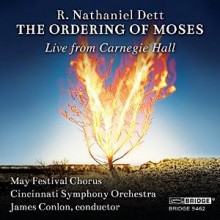 Title: The Ordering of Moses – Live From Carnegie Hall

R. Nathaniel Dett (1882-1943) was one of the most important and highly regarded Black composers of the early twentieth century. Educated at Ohio’s Oberlin Conservatory (B. Mus, 1908), he began his career as a composer and pianist, but also regularly served as a choral conductor—first, at his local church, later as director of the choirs at the Hampton Institute in Virginia and Bennett College in Greensboro, NC.

In 1932 Dett composed his first large choral work, The Ordering of Moses (subtitled Biblical Folk Scene for Soli, Chorus and Orchestra), as his master’s thesis for the Eastman School of Music, but it wasn’t published until 1937. That same year it was premiered at the Cincinnati May Festival under Eugene Goossens. Begun in 1873 and initially directed by Theodore Thomas (who later led the New York Philharmonic and Chicago Symphony Orchestra), the May Festival is one of the oldest and most prestigious choral festivals in the U.S., with a long history of championing and premiering new works. The programming of Dett’s oratorio was a major coup for the composer, especially since it was broadcast live nationwide over NBC radio (apparently three-quarters of the concert still exists on lacquer disc airchecks).[i] The work was subsequently performed in other major cities and revived by the May Festival in 1956 with Leontyne Price as a featured soloist, but has seldom been heard since.

Nearly 80 years later, James Conlon and the Cincinnati Symphony Orchestra decided to premiere The Ordering of Moses in New York at Carnegie Hall as part of their Spring For Music initiative, reflecting concerted efforts to bring the community together through diversified programming. The concert captured in this recording was performed live on May 9, 2014 and features the May Festival Chorus led by Robert Porco (who taught choral conducting for 20 years at the IU Jacobs School of Music). The soloists, who all give exceptional performances, include soprano Latonia Moore as Miriam, tenor Rodrick Dixon as Moses, mezzo-soprano Ronnita Nicole Miller as the voice of Israel, and baritone Donnie Ray Albert as the voice of God/the Word.

The oratorio uses “text based on scripture and folklore” and draws from the books of Exodus and Lamentations, but also weaves in the words of spirituals, with strains of “Go Down Moses” serving as a leitmotif throughout. It’s apparent from the introduction that this is a monumental work of the highest order, shedding new light on Dett’s ability to write for a full orchestra. On the opening choruses, string and harp solos combine with the rattling of chains to depict the lament of “All Israel’s Children” and “O Lord, Behold My Affliction.” The track “Who Hath Made a Man Dumb” concludes with a full chorus arrangement of “Go Down Moses” which segues into an orchestral interlude. Other highlights include the operatic “When Moses Smote the Water” followed by the thrilling and very cinematic interlude “The Egyptians Pursue.” The oratorio concludes on a hopeful note with the chorus “He Is the King of Kings” as the freed Israelites rejoice.

The Ordering of Moses stands the test of time, as relevant today as in 1937, and in no way feels dated or self-conscious. Thanks to the Cincinnati Symphony Orchestra we now have an excellent modern recording of Dett’s oratorio, performed to very high standards, that truly honors the genius of R. Nathaniel Dett.