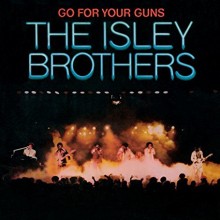 Title: Go For Your Guns

Look let’s be honest, most Isley Brothers fans know the 1977 album Go For Your Guns for its big hits “Footsteps In The Dark” and “Voyage To Atlantis.”  Also, these two particular songs are usually included on most Isley Brothers Greatest Hits compilations, so why might a reissue of Go For Your Guns be worth a spin?  Well, there are a couple of reasons. The first is to reintroduce the record as whole. The entire album.  This is a powerful piece of work that really illustrates that the Isley Brothers are, in a lot of ways, still underrated considering their contribution to modern popular music.  Beyond the hits, also included are tracks such as “The Pride”—which sets the album in righteous fashion with an exploration of one of life’s major motivations—and “Tell Me When You Need It Again” complete with a fat, funky bassline courtesy of Marvin Isley, plus one of my favorites, “Climbing Up the Ladder.”  The latter is as funky and rock-edged a workout as any early Funkadelic side.  Ernie Isley really leans into guitar, demonstrating his prowess with a biting guitar solo which illustrates how powerful the brothers became as a unit with their 3+3 lineup. This lineup had begun a few albums prior, adding brothers Ernie and Marvin on guitar and bass respectively, as well as brother-in-law Chris Jasper on keyboards, to the vocal trio of Ron, Rudolph, and O’Kelly.  Ernie also flexes on the album’s title track, which is essentially an extension of the funk groove from “Livin’ the Life.” This edition, digitally remastered from the master tapes, also includes three bonus tracks including the disco versions of “The Pride” and “Livin’ in the Life/Go for Your Guns.”

The second reason to pick up this re-release, as most lovers of reissues might tell you, is for the stories included in the liner notes. This reissue does not disappoint.  Written by A. Scott Galloway, who is clearly both a funk and Isley Brothers aficionado, the notes are chock full of great stories. I won’t spoil too much here, but for those who are fans of shows like VH1’s Behind The Music and TV One’s Unsung, there are some gems here.  For example, the Isleys were tapped to contribute one of the songs from Go For Your Guns to the soundtrack that became Saturday Night Fever.  Interested in which song it was and why in God’s name they decided not to do it? That question and more are answered in Galloway’s engaging liner notes.

And yes, I’ve purposely circumvented making this review all about the big hits, but I must say, the bridge on “Voyage To Atlantis” is still as ethereal (and lit) as it ever was.  (On a side note, I did a quick cursory search and “Voyage” has been sampled over 40 times and only one producer has flipped the bridge groove as opposed to the main groove.  How is that possible??) Anyway, great record + great notes = great reissue.