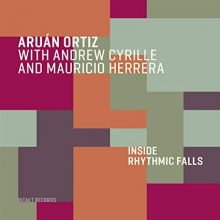 Many artists are known for expressing their cultural identity through music, but the issue most grapple with is how to articulate their own cultural experiences while also evoking the musical traditions of the people. For pianist and composer Aruán Ortiz, the answer lies in the culturally relevant storytelling abilities of the artist. His newest release, Inside Rhythmic Falls, aims to capture “the symphony of everyday life” in his birthplace, the Oriente Province of Cuba, while telling the story of the people and his Afro-Cuban heritage. Joined by legendary drummer Andrew Cyrille, percussionist Mauricio Herrera, spoken word artist Marlène Ramírez-Cancio and narrator Emeline Michel, Ortiz utilizes the changüí by substituting guitar for his piano in the guitar-and-drum music style, while “reconstructing and reconfiguring” the musical aesthetics to uplift the Afro-Cuban voices that were historically repressed, silenced and/or “hidden.”

END_OF_DOCUMENT_TOKEN_TO_BE_REPLACED 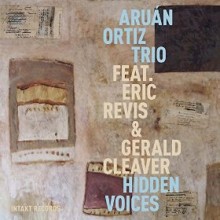 The Cuban-born citizen of the world Aruán Ortiz has released another in a long line of prolific projects, this time backed by bassist Eric Revis and drummer Gerald Cleaver.  Sporting a style that he calls “Cuban Cubism,”  Ortiz and company demonstrate influences from both the Latin and avant-garde wings of jazz, with a decided emphasis on the latter.  This is evident at a cursory glance at the track listing — Ortiz and company included an Ornette Coleman medley of “Open & Close” and “The Sphinx.”  This modernist impulse also appears on cuts such as “Analytical Symmetry,” and the two part “Arabesques of a Geometrical Rose,” tracks culled from a six concert series titled Music and Architecture (inspired by Iannis Xenakis’s volume of the same name) in which the pianist/composer and his sidemen developed musical themes based upon architectural patterns and non-musical contexts.

Due in part to the group’s abstract approach, many listeners will not hear much that they find familiar on this release, either melodically or conceptually.  While Ortiz and company do perform Thelonious Monk’s “Skippy” and the traditional Cuban song “Uno, dos ye tres, que paso más chévere,” these are primarily vehicles for the group’s improvisations that are more “out there” than their musical templates might suggest.  Like much avant-garde jazz, this release requires considerable effort for listeners to penetrate the cerebral compositions and deep interpretations generated by Ortiz, Revis, and Cleaver.  This is an asset ultimately, but a challenging one that demands listeners pay the close and repeated attention that Hidden Voices ultimately requires.