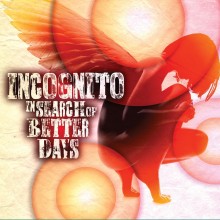 Title: In Search of Better Days

I personally first heard of British group Incognito in the 1990s, when the acid jazz scene made its way to the U.S. Groups such as Fertile Ground and the Brand New Heavies gave Incognito a run for their money on who was going to be the big dog. Well, in 2016, I think it is unanimous. Brand New Heavies had a taste of mainstream success and Fertile Ground was strictly an underground favorite, but Incognito is still regularly putting out new material. Their latest, In Search of Better Days, is Incognito’s 17th album, and if you are even a little familiar with their previous work, then you know what time it is. Incognito is funk, soul jazz and house. Yes, you read it right, house!

The intro for “Better Days” starts off with a very trippy house feel. After a buildup of five minutes, vocalist Vula Malinga takes over and then the track begins to sound more like we expect from Incognito.  Different vocalists are showcased throughout, including Imaani on the opening track, “Love Born in Flames”:

Maysa is featured on four tracks, including “Racing Through the Bends.” Catchy lyrics, combined with Maysa’s vocals equals a winner. Maysa shines on all of her tracks, but hands down this is the ONE.  Vocalist Tomoyasu Hotai gives “Bridges of Fire” a very different feel, but without a doubt it’s still smooth. Incognito is just that, smooth. After seventeen albums, Incognito has proven they have staying power. That’s a good thing.