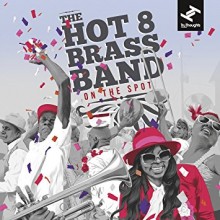 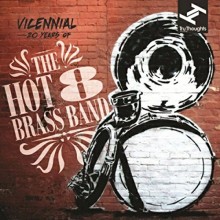 The Hot 8 Brass Band celebrates its 20 year anniversary with a new album titled Vicennial—20 Years of the Hot 8 Brass Band. This proves to be no ordinary feat for the group in the context of their “Hot 8 curse”; the band has lost four key musicians to violence and illness, trumpet player Terell “Burger” Batiste lost his legs in a tragic car accident, and various members were displaced throughout the country after Hurricane Katrina. While their tragedies may invite sympathy, New Orleans culture celebrates perseverance in the face of hardship. Feel good music is a key ingredient in coping and is precisely what Hot 8 brings to the table on their latest offering.

Vicennial contains 11 tracks, 7 of which are re-workings from previous Hot 8 albums such as Rock With the Hot 8, The Life and Times of…, and Tombstone. The new interpretations bring fresh perspective and a new sense of direction. Hot 8 showcases its skillful funk brass band chops over fifty-four minutes with rambunctious horn lines, fantastic sousaphone rips, and gripping group vocals. The group hits the listener hard with the opener “What’s my Name (Rock with the Hot 8),” a clear homage to slain snare drummer Dinerral Shavers who originally wrote and arranged the piece. Hot 8 maintains its intensity on another highlight, the new rendition of “Take it to the House,” featuring powerful cries and emotionally charged horn lines in homage to trumpeter Jacob Johnson, who was murdered in Hot 8’s first year as an ensemble.

Their rendition of Marvin Gaye’s “Sexual Healing” gives us a taste of Hot 8’s versatility. This tune has been a signature of the group, pushing it to standard repertoire for the brass band community. The Hot 8 put the vocals front and center like Marvin Gaye’s original, but what makes it unique is the difference in rhythm. Hot 8 brings something fresh and authentic, it grooves and makes you dance. A new addition to the Hot 8 arsenal is the Temptations’ “Papa Was a Rolling Stone.” As with “Sexual Healing,” the vocals are the focal point; however, where one person can do justice for Gaye, it is much harder for one person to tackle all five parts of the Temptations. The arrangement could have been better had the horns played the vocal parts, only because Hot 8 has the expertise to execute it successfully. But the horns still steal the show with Shamarr Allen’s trumpet solo on the track in which he incorporates funk, soul, blues, and bebop phrases together successfully with good taste. In “Just My Imagination” (the other Temptations tune on the album), the melody is carried effortlessly by trombonist Tyrus Chapman. Chapman is accompanied by lush chords from the rest of the horns and fantastic rhythm section work that gives the tune a new feel, one that hints of the notorious New Orleans bounce style.

Vicennial also shows the listener a gentle and elegant side of the Hot 8 through “Royal Garden Blues,” which displays reverence to the trad-jazz style of New Orleans brass bands. It is done with style and restraint, though it seems somewhat out of place from the rest of the album. “We Shall Walk Through the Streets of the City” is a standout, showcasing an approach lighter than the group’s usual bombast, with great gospel vocals by Betty Ann Williams and complimentary solos by band members, none trying to outshine the other.

The Hot 8 Brass Band proves to us why it has been successful over the course of a 20 year career with a wide range of styles and genres, each firmly tucked up their sleeves. This latest release shows a wonderful level of reverence, respect, and homage to those who helped the group get to where they are today, and make no mistake, The Hot 8 Brass Band is celebrating with ‘feel good’ music.