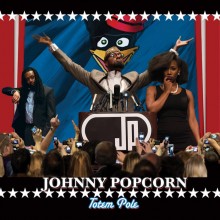 Johnny Popcorn? Yes that is the name of this group and I love it. Hailing from Philadelphia, the five member band features vocals from Hezekiah (Davis) and Jani Coral, with Lloyd Alexander on guitar, Freshie on bass, and Clayton Crothers on drums. They’ve opened for a who’s who in the neo soul/progressive soul scene: Kindred, Oddisee, Robert Glasper, Ledisi, RJD2, Mos Def, Talib Kweli, and Bilal. JP’s ten track sophomore album, Totem Pole, is rock—yes, rock! Now before some of you start frowning your face, it’s not hard rock. It’s not Bad Brains, and there are no Vernon Reid guitar solo riffs. However, Totem Pole offers a welcome fusion of sound and if you free your mind, you may enjoy it.

“Go Go Go” is perhaps the most up tempo of all the tracks. It opens with, believe it or not, acoustic guitar that recalls George Michael’s “Faith.” The catchy chorus has Hezekiah and the group chanting and clapping, “go, go, go – you got to get up and go, go, go” as they encourage folks to chase their dreams.

“Coming Home” is another good track thanks to drummer Chuck Treece, who is a local legend in Philly. Hezekiah is once again featured on vocals, and listening to this track you might think Lenny Kravitz could have recorded it. “What a Day” is a step out of rock and into funk. The opening bass is a sure fire winner and will get heads nodding up and down.

Johnny Popcorn’s Totem Pole is certainly different. Where so many acts want to copycat each other, this band stands out! The only question remains, will they or can they find an audience? Judging by who JP has collaborated with, I’d say yes. Totem Pole is a promising follow-up to their debut album, The Crow, and I’m already waiting to see what direction they will pull the audience on their next release.