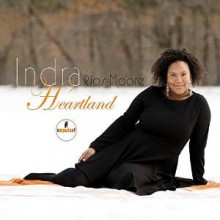 Indra Rios-Moore grew up in Manhattan, singing along to the radio every morning, learning American folk songs, and eventually getting classical vocal training. After marrying Danish saxophonist Benjamin Traerup, she moved to Denmark and joined his jazz trio along with his friend and bassist Thomas Sejthen. Their first two albums won the 2010 and 2012 Best Jazz Vocal Album awards in Denmark.

Rios-Moore’s third album, Heartland, marries her soft and soulful vocals with smooth jazz and harmonious instrumentation. Produced by Larry Klein, who’s worked with artists such as Joni Mitchell and Herbie Hancock, the album is easygoing and effortless, with wide dynamic variation and well thought-out arrangements.

The first song, “Little Black Train,” is a folk tune once sung by Woodie Guthrie. It’s full of soul and energy, percussively driven and propelled by a saxophone solo:

The cover of Duke Ellington’s “Azure” is quiet and sultry, showing the power of subtlety as the dynamics leisurely build and fall. Indra takes her time on the vocals, and it pays off in this beautiful song. There is also a cover of David Bowie’s “Heroes” in the form of a ballad that often sounds mournful, particularly now in the context of Bowie’s death in January. Other outstanding tracks include “Money,” which shows off the raw power and diversity in Indra’s voice, and the heartbreaking yet moving “Your Long Journey.”

Rios-Moore said all the songs chosen for the album are very personal because they brought her comfort when her mother passed away shortly before she gave birth to her son. In her words, they “traverse the territories of the heart.” While the album focuses on journeys, sometimes explicitly in songs about trains and lost loves, Indra also takes time to mourn, such as in to the somber final track “Solitude,” which begs, “Dear Lord above, send back my love.” Any listener of Heartland is fortunate to hear such a beautiful, authentic expression of what is means to simultaneously lose someone and celebrate new life.