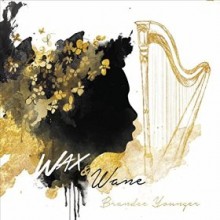 Even to seasoned listeners, “jazz harp” might sound like a risky proposition.  The phrase may call to mind Alice Coltrane or Dorothy Ashby, but more likely than not, it may remind us of the countless lesser attempts to copy the sound of the two women who most famously tried to assert the instrument as one capable of playing good jazz music.  While it will be up to the history books to judge the importance of Brandee Younger’s latest release, Wax & Wane, the album certainly sounds like a fresh interpretation of the role that the instrument can play in contemporary jazz.

Younger is accompanied by a fairly standard combo, made up of Dana Hawkins (drums), Dezron Douglas (electric bass), Mark Whitfield (guitar), Chelsea Baratz (tenor sax), and flutist Anne Drummond, each of whom is an accomplished performer in his or her own right. Younger’s strong choice of side musicians is a large part of the sturdy groundwork that she laid for this album’s best moments.  While this record at times gestures to “pretty sounding harp” cliches, Wax & Wane does not rely upon the lush instrumental textures that one may expect from a band led by a harpist.  While the evocations of chamber music are the strongest on “Ruby Echo,” other tracks on this album pull more heavily from funk, grooving steadily along throughout the disc’s 7 tracks.

On “Soul Vibrations,” the album’s introductory cut, the excellent jazz guitarist Mark Whitfield opens the record with wah-wah guitar flavored heavily by the musical legacy of Shaft. Dezron Douglas anchors “Afro Harping” in a subtle but funky bass groove. On both of these cuts, Younger plays in a manner more typical of feedback-oriented electric guitar textures than swirling harp arpeggios. While the album’s title track tilts a bit more slick and polished than this reviewer would prefer, this ultimately comes down to a matter of taste; even though it sounds like smooth jazz, it sounds like good smooth jazz. Overall, the playing on this album is anything but typical. Rrather, like the better efforts of Younger’s musical forebears Ashby and Coltrane, Wax & Wane asserts a number of possibilities for more fully including the harp in the canon of jazz instruments. 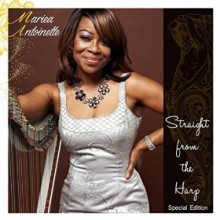 Title: Straight from the Harp

Though the “harp” in African American music is more typically a harmonica, Mariea Antoinette proves that the concert harp “is not a quiet, dreamy, boring instrument,” but can be “funky like you’ve never heard it before.” Originally trained in classical music, the San Diego artist expanded her horizons to become an urban-jazz harpist, performing for the likes of Ne-Yo, Mary J. Blige and Jamie Foxx.

Antoinette fuses multiple genres on her sophomore album, Straight from the Harp. Though falling predominantly into the smooth jazz domain, she brings elements of EDM, hip-hop, pop, rock, and R&B into the mix across 13 tracks that interweave virtuosic harp solos and interludes. The bulk of the album features lush arrangements of many classics, including Bobby Brown’s “Rock Wit’Cha,” Curtis Mayfield’s “Give Me Your Love,” a super funky version of the ‘70s classic “Boogie Nights,” Barry White’s hit single “I’m Gonna Love You (Just A Little More Baby),” and a “reggae light” version of Bob Marley’s “Waiting In Vain.”

In addition to these covers, there are a number of original songs, including “Special Treasure” which fuses a ‘70s soul sound with hip-hop beats, and the closing track “Walk the Walk,” featuring electric violinist Karen Briggs in a sweeping cinematic fusion of smooth jazz and soft rock with classical riffs on the harp.

In addition to performing as a soloist, Antoinette has collaborated with the all-female ensemble Jazz In Pink since 2007 (of which Biggs is a member), and still performs with orchestras on occasion. She has certainly succeeded in her goal of making the harp “a funky and sexy instrument,” displaying a degree of versatility that definitely sets her apart.