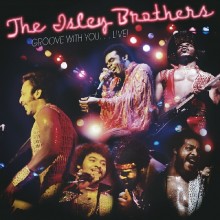 First released as a limited edition LP for Record Store Day 2015, the “lost live album” by the Isley Brothers is now available for the first time on CD, thanks to Real Gone Music. But first, let’s set the record straight—this is not an actual live concert album. Recorded in 1980 at Bearsville Sound Studio in Woodstock, New York, the engineers overdubbed crowd noise between (and over) tracks, along with the opening introduction of the group by MC “Gorgeous” George Odell. Passed over by CBS, Groove With You…Live! was shelved for 35 years until it was released last year in its original form on vinyl, and then remastered from the pre-overdubbed session tapes for inclusion in Legacy’s 23-CD box set, The RCA Victor and T-Neck Album Masters, 1959-1983.*

Featured on the album are many of the group’s greatest hits from the 1970s, including the Latin- tinged “That Lady” electrified by Ernie’s lead guitar, the funky “Take Me to the Next Phase” and “Livin’ in the Life,” the message song “Fight the Power,” and the iconic “Summer Breeze.” Some of the tracks, such as “Voyage to Atlantis” and “Don’t Say Goodnight (It’s Time For Love)” are considerably longer than the original album versions, lending to the “live” feel of this project.

Joe Marchese’s extensive liner notes remind us of the 50-year legacy of the Cincinnati-born Isley Brothers, starting with their seminal hit song “Shout” in 1959 and their 1962 cover of “Twist and Shout,” which influenced the version released by the Beatles the following year. Quotes from interviews with Ernie Isley and Chris Jasper punctuate the text, and indicate the Isley’s had all but forgotten about this shelved album until quite recently.

If you don’t already have the 23-CD box set (highly recommended), you should certainly consider this new release if you’re not bothered by questions of authenticity in the mix.

* Groove With You…Live! is listed as The Wild in Woodstock: The Isley Brothers Live at Bearsville Sound Studio on Legacy’s 23-CD set, and is available under that title in a MP3 version.