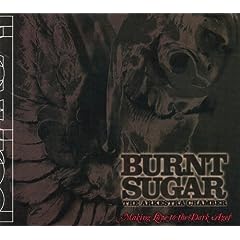 Making Love to the Dark Ages is a unique cornucopia of music.  Bandleader Greg Tate has taken elements from the entire history of black music and fused them together in interesting ways.  The album is such a complete work  of art that a track by track dissection would do it an injustice.  A complete rundown would also be like giving away the ending to noteworthy book.  However, a topical description could allow one to understand what the albums aim is.

There are more timbral nuances heard in this album than in any ten you could pull from nearly any shelf in a record shop, and an excellent combination of sonic possibilities that range from electronically enhanced violins to gutteral vocals.  Saxophone sounds range from Charlie Parker quotes to Coletrane modality, to the free shrieking and blues balling of Ornette Coleman.  The versatility of the saxophonist is truly amazing because while reminding the listener of all these milestones of the past he always has his own voice and melds the three styles masterfully.  The other instrument that has standout quality is the guitar.  Vernon Reid (perhaps best known as the guitarist for Living Colour) is a presence to be acknowledged.  His guitar playing is soulful but not cliche.  The tone he gets evokes the “ghosts of slavery ships” while his deft agility on the instrument places him a cut above many other players.  (If only he got the recognition he deserves!)

Loops are an important part of this album and they serve a true purpose.  With the majority of the works being improvised, these stagnant loops provide a great contrast and cast a wonderful backdrop for the sinewy lines played by the lead instruments.  There are unique juxtapositions of such things as 1920s salon piano with laptop beeping, swampy grooves with soprano vocalise, and overdriven violins against static ambience.  Following is a sample track, “Chains and Water”:

The elements of delta blues are found from the start.  The riff like droning of the guitar against the repetitive vocal line that starts the album are reminiscent of work songs.  Jazz influences are pervasive in the drums, bass and saxophone.  The use of upright bass adds to the depth of sonic qualities and the historical impact.  One can trace the music from jazz to (that horrible word) fusion.  But this is fusion of the highest class.  It could even simply be called black rock.  Hip hop is present in the use of modern technology.  There are over 150 years of influence found in this CD and they are all  incredibly distinct without sounding like a messy hodgepodge of poorly developed ideas.  Tate clearly had a vision for this project.

The length of the tracks may be a deterrent to some buyers but that is truly a shame.  In an age of singles and reverting back to the radio edit formula, Making Love to the Dark Ages is a gem.  The pieces here truly breathe and expand in an organic way and though some are fifteen minutes in length, they tell such a story that one doesn’t notice.  The album is a strong composition as a whole and the length of it’s pieces or their individual shortcomings shouldn’t be a reason for judgement. In fact, the album is meant to be listened to as one work.  Even with the inclusion of a Ron Carter/Miles Davis piece (“Eighty-One”), the common thread running through the recording is very strong.    Anyone that likes concept albums, strong over-arching ideas, or the black aesthetic in general would appreciate the diversified focus found in this album.  Anyone with respect for jazz would definitely enjoy the improvisational aspects found in Making Love to the Dark Ages.  However, it may be too deep or long for some to give it the thorough listening that it deserves.

Editor’s note:  Greg Tate, a founding member of the Black Rock Coalition, will be one of the featured speakers at the forthcoming conference “Reclaiming the Right to Rock: Black Experiences in Rock Music.”