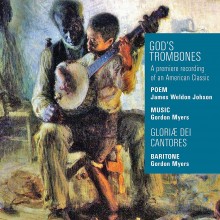 Born in 1871, James Weldon Johnson is perhaps best known in musical circles as the brother of composer John Rosamond Johnson, who set his poem “Lift Ev’ry Voice and Sing” to music in 1900. But James was also a towering literary figure, among other accomplishments, and one of his best known works is God’s Trombones: Seven Negro Sermons in Verse, first published in 1927. Based on an old folk sermon that began with the creation of the world and ended with the Judgement Day,” the book of poems is now considered a classic of American literature.

American composer and baritone Gordon Myers (1919-2006) set God’s Trombones to music in 1966. The oratorio was Myer’s doctoral thesis composition and he articulated his goals as follows: “Approaching the task, I kept the sound of a church choir, the lilt of a folk song, and the vitality of the Negro Spiritual in my ear, and set out to blend them into one consistent idiom.”

In 1995, the premiere recording of the work was released by Paraclete Press, performed by Gloriae Dei Cantores conducted by Elizabeth C. Petterson, with Myers as the featured baritone. Based in Orleans, Mass., Gloriae Dei Cantores has a mission to “preserve in recordings worthy American sacred music that would otherwise be neglected,” and consequently decided to reissue their 1995 recording of God’s Trombones, with original liner notes and song texts included. Those who do not own a copy of the original release should certainly consider this new version.  It must be noted, however, that the movement “Let My People Go” was sacrificed due to time constraints on the original pressing. Regrettably, the new release is also incomplete—it’s a pity is wasn’t expanded to a two-CD set, but presumably the missing movement was simply not recorded during the 1995 session.