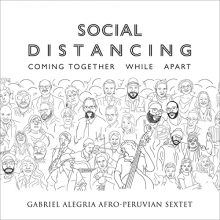 Like most artists, trumpeter and composer Gabriel Alegría and members of his Afro-Peruvian Sextet have been profoundly affected by the pandemic. But thanks to their “determined fans and a poem-gone-viral,” the group has been able to persevere in the face of adversity. The result is their new concept album, Social Distancing, a “musical memoir (& protest)” based on artistic collaborations inspired by the 2020 pandemic as well as issues of social justice that have surfaced over that past year. “Every sound and rhythm,” says Alegría, “is an attempt to guide you safely away from the confusion” into the band’s safe space: Afro-Peruvian jazz music.

END_OF_DOCUMENT_TOKEN_TO_BE_REPLACED

One feature that deserves to be highlighted about the sextet’s work in 10 is the deep “popular” character of its sound. The blend between Afro-Peruvian music and contemporary North American jazz reaches a new level of maturity in this album. In the fantastic previous work of Alegria’s sextet in the albums Nuevo Mundo (2008), Pucusana (2010), Afro-Peruvian Jazz Secrets (2012), and Ciudad de Los Reyes (2013), two musical streams can be clearly perceived: very traditional sounding Afro-Peruvian beats on one hand, and the very characteristic virtuosic—I would even say “academic”—sound of contemporary North American jazz on the other. This blend takes a significant step further in 10, an album on which the two streams are more difficult to take apart, as its sound is very global in terms of the musical elements of mainstream jazz it uses, but at the same time sounds profoundly Afro-Peruvian.

The ten songs included on 10 are Afro-Peruvian jazz versions of a blend of songs that include popular jazz compositions, Peruvian traditional tunes and even two national anthems. In my opinion, the creative job that the sextet did with these pieces is fantastic. In the adaptation of these pieces to their Afro-Peruvian jazz versions, Alegría and his crew re-engineered them in such a manner that, while maintaining the reference to their originals, they constitute significantly different compositions. Particularly interesting is re-conceptualization of Peruvian songs such as “Taita Huaranguito,” “El Condor Pasa” or “Contigo Perú.” The creative work of Alegria’s sextet on these very popular songs, often considered as over-exposed by Peruvian audiences, insufflates them with new life and fully exploits the creative possibilities that these pieces offer.

One of the most interesting surprises of this album is the participation of not only world-renowned musicians from the jazz and Latin jazz scene such as Ron Carter or Arturo O’Farril, but also of Peruvian enshrined Criollo and Afro-Peruvian musicians such as the legendary composer and musician José “Pepe” Villalobos, guitarist Gustavo Urbina, and singers Rosa Guzmán and Félix Valdelomar. While, as a Peruvian music aficionado, I missed a more extended participation of these Peruvian musicians in the album, their contribution in “a,” “b” and “c” through choirs, “guapeos” (vocal interjections), and guitar accompaniment are remarkable and significantly enrich the songs. These perfectly complement the traditional musical baggage that members of the sextet—such as Afro-Peruvian master musicians Yuri Juárez and Freddy Lobatón—already carry.

In sum, 10 is not only remarkable as an album, but also as an example of how to conduct a respectful fusion project that incorporates not only traditional sounds but traditional performers as well. This album represents a significant step in the sextet’s already remarkable trajectory and keeps the expectations high for the band’s future releases.