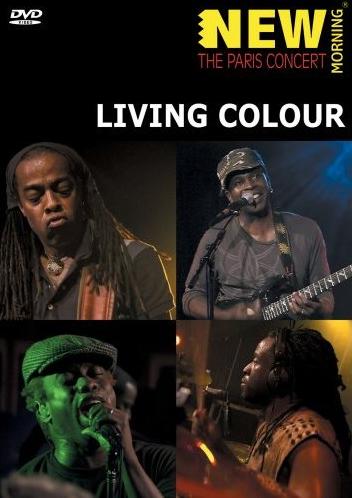 
Since their formation in 1983, Living Colour has been reclaiming the right to rock for black artists everywhere. Even before the release of their 1988 debut album, Vivid, the band members were actively involved in the Black Rock Coalition, a non-profit organization founded by journalist Greg Tate, producer Konda Mason, and Living Colour guitarist Vernon Reid as a means of supporting and sponsoring black rock artists.

Consisting of Reid, Will Calhoun (drums), Corey Glover (vocals), and Doug Wimbish (bass)-the latter of whom replaced Muzz Skillings in 1992-Living Color has successfully overcome a number of obstacles faced by black rock artists seeking to break into the commercial music industry. The very release of Vivid by Epic Records was one such success. The album quickly hit number 6 on the Billboard 200. Soon after, MTV picked up “Cult of Personality,” which was awarded both MTV’s Best New Artist Award and a Grammy Award for Best Hard Rock Performance in 1989. More than twenty years later, “Cult of Personality” remains immensely popular and has recently featured in the game Guitar Hero III: Legends of Rock, so now you too can enjoy Living Colour’s experience of having to play a really great song over, and over, and over again.

Following a relatively brief five-year break-up, the band reunited in 2000 and has been actively touring in the US and Europe since 2001. In addition to compilations and remixes, the band released a new album, Collideøscope through Sanctuary in 2003 and a number of live recordings from some of their recent concerts including Instant Live: Avalon (2004) and On Stage @ World Café Live (2005).

The band’s most recent live releases are a CD and DVD of The Paris Concert, which were recorded at the New Morning club in Paris in July 2007. Living Colour is somewhat outside the standard fare for New Morning, which has a reputation as one of the best Parisian jazz clubs. Regardless, the DVD is clear evidence that the band was well-received by an enthusiastic, if somewhat laidback, audience. The New Morning Vision film crew clearly knows this venue inside and out and the shooting is fantastic. Particularly worth looking for are extreme close-ups of Reid’s solo in “Funny Vibe,” Wimbush’s use of slide guitar techniques right before the band launches into “Memories Can’t Wait,” and Calhoun’s extend drum solo.

Based on a quick comparison, the audio from the CD and DVD are more or less the same, so you could probably get away with buying one or the other. Obviously the DVD offers visuals and the CD is more portable, but other than that the only difference seems to be the amount of normalization on the CD. The main result is that the CD is louder throughout, but not to the point that it destroys the balance or the dynamic range of the individual tracks. Neither item offers additional bonus features or tracks, so it really comes down to whether you prefer an audio recording, a video recording, or both.

The set list for the Paris Concert contains a mix of standards including “Glamour Boys,” “Ignorance is Bliss,” “Funny Vibe,” “Type,” “Middle Man,” “Memories Can’t Wait,” and of course, “Cult of Personality.” “Sacred Ground” also features in the set. It first manifests as a brief jazz piece reminiscent of the 1970’s bee-bop sound of Sun Ra & His Astro Infinity Arkestra, before sinking into a more typical funk metal rendition.

The remainder of the set features “Flying,” “Nova,” and “Song without Sin” from Collideøscope, as well as covers of “Papa Was a Rolling Stone” and Hendrix’s “Crosstown Traffic.” Particularly unique to this show is the song “Either Way,” a new piece written and sung by Wimbush. The real showstopper, however, is definitely the stellar six-and-a-half minute drum solo by Calhoun. If you’re into percussion, the chance to watch Calhoun’s incredible performance alone makes the DVD worth the purchase price.

Although the members of Living Colour have reached a point in their careers where they could coast on their reputations alone, they’re still working hard to give their fans a great show. Whether they’re churning out “Cult of Personality” for the ten-thousandth time or debuting new material, the group interaction is tight and the solos demonstrate a level of artistry that extends well beyond the typical offerings of most rock bands. The Paris Concert is definitely worth adding to any rock music collection.

Editor’s Note: This review is part of our ongoing examination of black rock in preparation for “Reclaiming the Right to Rock: Black Experiences in Rock Music,” a two-day conference organized by the Archives of African American Music and Culture to be held on November 13-14, 2009, on the Indiana University-Bloomington campus. Visit the conference website at: http://www.indiana.edu/~aaamc/br/brconf_2009.html

Living Colour – “Go Away” from The Paris Concert