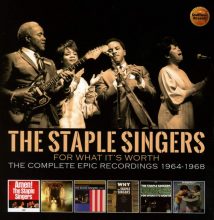 Given the immense popularity and historical importance of the Staple Singers, it’s hard to believe that some of their albums have not been reissued on CD. This new box set from the UK label Cherry Red offers the first-ever retrospective of the Staple Singers’ recordings for Epic. The six albums released by Epic between 1964-1968, featured in their entirety on this set, include Amen (1965), Freedom Highway (1965), and Why (1966), plus the CD debuts of Pray On (1967), For What It’s Worth (1967), and the always timely What The World Needs Now Is Love (1968). END_OF_DOCUMENT_TOKEN_TO_BE_REPLACED