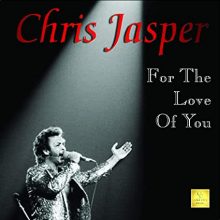 Keyboardist, songwriter, and Grammy Lifetime Achievement Award winner Chris Jasper has had a very extensive and successful career, recording 12 albums as a member of the Isley Brothers, in addition to 16 self-produced solo albums. Jasper has now taken a step back to reflect on some of the greatest compositions he wrote for the Isley Brothers from 1973-1983 in his most recent solo album, For the Love of You. This project is comprised of some of the group’s biggest hits, such as “I Once Had Your Love,” “Go For What You Know,” and the title track “For the Love of You,” a smooth and romantic rendition of the original mid-tempo track. The album also contains covers of R&B and pop classics including Sam Cooke’s “Nothing Can Change This Love,” Marvin Gaye’s “God Is Love,” Van Morrison’s “Have I Told You Lately,” Billy Preston’s “You Are So Beautiful,” and Diane Warren’s “I Don’t Want to Miss a Thing.”