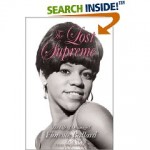 Peter Benjaminson, whose previous books include The Story of Motown (1979), delves much, much further into the life of Florence Ballard in his latest effort. As a reporter for the Detroit Free Press, Benjaminson had published an article in 1975 about the plight of Ballard, and was largely responsible for letting the world know that one of the original Supremes was not living high off of royalty checks, but was instead forced to accept welfare checks. Benjaminson went on to conduct a series of interviews with Ballard just prior to her death in 1976. When the success of the movie Dreamgirls sparked a renewed interest in the “Lost Supreme,” he decided to dust off the tapes and write a biography that would reveal the complete story of Flo Ballard.

Since the original interviews with Ballard, Benjaminson he has spoken with numerous colleagues, friends and family members–including former Motown publicity director Alan Abrams, former Supreme Mary Wilson, sister Linda Ballard, and daughters Michelle and Nicole. What has evolved from that legwork is a solid portrait of Ballard, from her teenage years through her tragic last days. Much of the text is in the form of direct quotes from the interviews, woven together with historical details. There are two appendices–“Florence Ballard, Primettes, and Supremes Discography” and “Excerpts from Florence Ballard’s Legal Case Against Motown Records et al.”–as well as a list of sources (mostly secondary, with the exception of interviews and court records).

Though there are no earth-shattering revelations in The Lost Supreme, and much of the story has been told in other books about Motown and the Supremes, it is still a solid and very engaging effort–but sadly one without a happy ending.