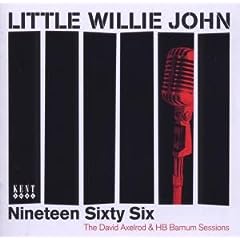 “The best album I ever produced that nobody’s ever heard”—David Axelrod.

William Edgar John, better known as Little Willie John due to his short stature, was born in Arkansas in 1937 and spent his formative years in Detroit with his sister, Dr. Mable John, a former member of Ray Charles’ Raelettes and the first female artist signed by Berry Gordy.  Something of a prodigy, Willie began touring with Paul Williams & His Orchestra when he was just 16.  Two years later he landed a recording contract with King Records in Cincinnati where he produced a long string of hit records including “Fever,” which climbed to #1 on the R&B charts in 1956 and was later covered by Peggy Lee and Elvis Presley. His 1955 recording of “I Need Your Love So Bad” has been cited as one of the first soul songs, along with Ray Charles’ “I Got a Woman,” recorded by Atlantic the previous year.

In 1964, at a time when Willie’s career was beginning to lag, he stabbed a man during a bar brawl and was sent to prison. Two years later, while out on appeal, Capitol Records organized a recording session for him, produced by the legendary team of H.B. Barnum and David Axelrod and backed by their regular session musicians, including bassist Carole Kaye, drummer Earl Palmer, saxophonist Clifford Scott, and guitarist Les Buie (who occasionally worked with James Brown).  The result was this previously unreleased “lost album,” which has been sitting in Capitol’s vaults for years due to contractual issues (Willie was still under contract to King at the time of the session).

Nineteen Sixty Six: The David Axelrod & HB Barnum Sessions kicks off with three tracks drawn from the first recording session held on the evening of February 19, 1966, two of which feature songs previously recorded by Willie. An updated version of “Country Girl” (a.k.a. “Home at Last”), originally released in 1955 by King, opens the set. Following are two  blues songs subjected to Willie’s special soul-infused treatment-“Suffering With The Blues,” which he originally recorded for King in 1956, and  “I Had A Dream” (a.k.a. “Just a Dream”).

The session scheduled five days later took a ninety degree turn. Instead of the R&B/ jump blues combo, the horns were replaced with a ten piece string section, and back-up vocalists were added, including Barnum’s sister Billie.  The producers’ imprint is all over this jazz and pop-oriented session, which bears a closer resemblance to Barnum’s 1960s productions with Frank Sinatra and Axelrod’s early work with Lou Rawls, not to mention some of Willie’s early ‘60s tracks for King, such as “Loving Care.”   The session begins with a great soul cover of Johnny Ace’s 1954 classic “Never Let Me Go.”  Following is perhaps the most incongruous track from this session, a truly inspired soulful rendition of Rogers and Hammerstein’s “If I Loved You” from the musical Carousel, which I didn’t immediately recognize, but now have played multiple times for family and friends (as in “see if you recognize this!”). No doubt the producers hoped to piggyback on the success of Nat King Cole Sings My Fair Lady, released by Capitol two years earlier. Other tracks from this session include the ballad “(I Need) Someone” and a bluesy version of “Welcome to the Club,” which was also popularized by Nat King Cole in a jazz arrangement recorded in 1958. Though this string session sounds oddly retro for a 1966 era R&B/soul singer, it is still very enjoyable and showcases a distinctly different side of Willie as a pop-oriented balladeer.

Later that afternoon the strings were sent home and the band gets its groove back with the smoking blues standard “Early in the Morning,” followed by one of the best tracks on the CD, “In The Dark,” which aptly demonstrates Willies vocal range and flexibility. Willie’s only original song on the album, “Crying in the Dark,” returns again to the blues idiom, and features some great solos by the band.  The session concludes with “You Are My Sunshine,” which once again shows Willie’s ability to completely transform a standard into a powerful demonstration of gospel-tinged soul. The remaining nine bonus tracks include alternate takes and stereo mixes.

Sadly, Little Willie John’s court appeal was overturned shortly after these recording sessions concluded, and he returned to prison. Two years later he died in the Washington state penitentiary in Walla Walla, just five months after a fatal plane crash claimed the life of soul superstar Otis Redding.  Though during his lifetime Willie achieved wide acclaim, he is seldom mentioned in the same breath as his contemporaries—Otis Redding, Sam Cooke, Ray Charles, and James Brown, among others—who were also instrumental in transforming gospel and rhythm and blues music into soul.  However, recent years have seen a resurgence of interest in Willie’s career, leading to several good retrospective CD compilations as well as an induction into the Rock and Roll Hall of Fame in 1996. At least one biography is also in progress, and Kent may have another project in the works. Perhaps Little Willie John will finally take his rightful place as one of the first soul singers.