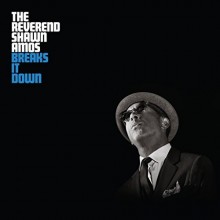 Title: The Reverend Shawn Amos Breaks It Down

The Reverend Shawn Amos is back at it again, preaching his brand of blues on his latest, The Reverend Shawn Amos Breaks It Down. His sophomore album, The Reverend Shawn Amos Loves You, showed us that the Rev had our best interests at heart, and this trend of his continues on his latest offering. Son of Wally Amos, the first African American talent agent for William Morris in addition to being the creator of Famous Amos Chocolate Chip Cookies, Reverend Shawn Amos has been an ordained minister with the Universal Life Church, an A&R Executive at Rhino Entertainment and vice president of A&R at Shout! Factory.  He discovered blues while attending NYU film school, spending his summers tracing down the southern places in Peter Guralnick’s Feel Like Going Home trilogy from which Amos drew his initial blues inspiration.

The nine-song set includes five original songs, two inspired covers, and a three track “Freedom Suite” that rolls out like a Sunday Passion play. Amos was obviously inspired by the tremendous turmoil and social unrest around the world today in his songwriting, yet digging deeper into the lyrics reveals clues of admitted recent hardships in his home life. The result is an album that strikes a delicate balance between capturing personal challenges while capitalizing on the zeitgeist of this critical time in history.

The album opens with the early morning confessional “Moved,” followed by the first of his new freedom songs, “2017.”  This classic soul groove in the style of Curtis Mayfield and the Staple Singers was recorded at Royal Studios in Memphis. Amos is joined by Al Green’s backing band, the HI Rhythm Section, along with a string arrangement from Chris Anderson and vocals from the Masqueraders. The cornerstone lyric is a simple mandate: “hate and fear ain’t no vaccine, we’ve got to think about what our children’s eyes have seen in the year 2017.” The next song, “Hold Hands” is an Amos-led congregational plea for peace that features Hammond B3 from Peter Adams.

The Freedom Suite officially begins with track 5, which is an a cappella reading of Uncle Tom’s prayer. This pays homage to the Freedom Singers founder Cordell Hull Reagon, who first recorded the powerful civil rights song in the early 1960s. Amos then offers another side of his pulpit in “Does My Life Matter,” an expansion on Booker T. Washington’s words and intent. The fiery funk of “(We’ve Got To) Come Together” functions as an energetic admonishment, and the closing track, “(What’s So Funny ‘Bout) Peace, Love, and Understanding,” serves as a final alter call for the album and its audience.

The Reverend Shawn Amos Breaks It Down, as an album of timely songs, not only furthers Amos’ mission statement, but also stands as a landmark artistic achievement for his career as a bluesman of purpose.