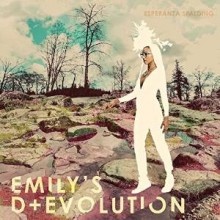 Multiple Grammy-winner bassist and vocalist Esperanza Spalding has demonstrated a David Bowie-esque knack for reinvention over the course of her past 4 albums as a leader.  2010’s excellent Chamber Music Society showcased Spalding’s knack for tight, delicately crafted acoustic arrangements, while 2012’s Radio Music Society demonstrated her aptitude for a more pop-infused sensibility as well. Versatility has characterized her work as a side musician, too. She has appeared on recordings with artists as diverse as Mike Stern and M. Ward.

Spalding has managed yet another feat of re-invention on Emily’s D+Evolution.  Taking her middle name as the album’s moniker, she explores yet another side of her broad musical influences, this time using the power-rock trio as the vehicle an exploration of another genre, necessitating an approach to her instrument that fans haven’t heard yet.  Swapping the her Afro for braids and her upright for a fretless bass guitar and drawing more musically from Jimi Hendrix than Jim Hall, Spalding, guitarist Matthew Stevens, and drummer Karriem Riggins put forward a soulful brand of rock on this release, falling somewhere between Black Messiah and Axis: Bold as Love.

The hardest-rocking cut on Emily’s D+Evolution is the album’s lead single “Good Lava,” which combines the dissonant rock of Nirvana’s In Utero period with monster riffs that would make Jimmy Page proud.  Layered atop these guitars and drums are multitracked vocal harmonies demonstrating Spalding ability not only as a rocker, but as an arranger, too.  This minimalistic trio allows room for Spalding to showcase her wizardry on the bass guitar, too.  The counterpoint between her voice and instrument on “Judas” will make any instrumentalist wonder how she can simultaneously deliver her rhythmic, Joni Mitchell- esque sung rap with her slick and serpentine Jaco Pastorius bass-funk.  The classic period Mitchell comparison also resonates on “Earth to Heaven” and “Ebony and Ivory” (which is not a cover of the Paul McCartney/ Michael Jackson collab of the same name). For Spalding, songwriting rules the day, and the three virtuoso instrumentalists in her band support the subtle and challenging songs that Spalding has crafted, laying back when they need to but also digging in when called for, as Stevens does with a great guitar solo on “One.”

Ever the poster child of flipping the script, Spalding’s newest release is a haven of cultural intertextuality.  “Farewell Dolly,” is a spaced out rethinking of “Hello Dolly” that barely (if at all) references the original.  As its title would imply, “Farewell Dolly” is bleak, both sonically and lyrically, with Spalding’s impressionistic lyrics accompanied only by her spaced-out, chorus-laden bass guitar.  “Funk the Fear” is a prog-rock odyssey through winding spiritual and social territory, and “I Want it Now” is a bizarro cover of Veruca Salt’s number (the bratty girl who won a Golden Ticket, not the Chicago alt-rock band) from Willy Wonka and the Chocolate Factory.

Spalding and company have truly outdone themselves this time–the only things on this record that smack of the jazz styles that have been the bassist’s calling card is the complex harmonic and melodic languages the band uses.  Other than that, Emily’s D+Evolution rocks, allowing the group to explore uncharted musical and conceptual territory.