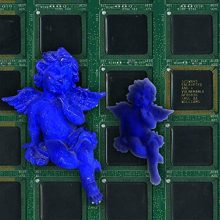 With his most current album, Saul Williams encourages us to do just that.  Self-produced Encrypted and Vulnerable is the second in a three-part series, preceded by 2016’s MartyrLoserKing, but more importantly, Williams’ work is one more piece in a much larger metaphysical puzzle. The MartyrLoserKing project —a 3-part multi-media compilation of albums, a musical film and an upcoming graphic novel —focuses on governmental surveilling and silencing of global activists through the medium of Afrofuturistic performance. Of his current self-titled spoken word release, Williams describes it as “simultaneously a personal and intimately optimistic takedown on struggle, defiance, awareness, aloneness, and a takedown of heteronormative capitalistic patriarchal authoritarian politics in topics ranging from love, technology, religion, war, to migration.” END_OF_DOCUMENT_TOKEN_TO_BE_REPLACED