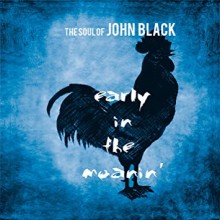 Title: Early in the Moanin’

Artist: The Soul of John Black

The Soul of John Black is a project centered around guitarist John Bigham. Best known for his time as a member of Fishbone, Bigham uses The Soul of John Black as a love letter to the blues.  His latest release, Early in the Moanin’, infuses elements of both Delta and Chicago blues with soul and funk sensibilities. The album finds “JB,” as he a known, running through songs filled with an earthy-southern feel.

Bigham puts his sense of humor at the center of many of the tracks, including the album opener “Can’t Be Helped,” where he playfully pleads for help from his partner for his ailment: “Doctor says I can’t be helped / by nobody but thee / now lay some hands on me.”

Early In Moanin’ is reminiscent of soul-blues greats like Little Milton or Z.Z. Hill, but with a 2017 sensibility. It conjures up visions of people dancing away the troubles of the day at the local watering hole. Bigham’s vocals and guitar work are both superb throughout the album. Despite the fact that blues is not his most oft-played genre, he feels completely at home in the setting.  His comfort at weaving between genres—blues, soul, funk, R&B—speaks to the interconnectedness of these genres at large.  Blues in many ways is the root and Bigham taps into it in spectacular fashion on this album. Early In Moanin’ is highly recommended for lovers of the soul-blues of Bobby “Blue” Bland, Denise LaSalle and Clarence Carter.