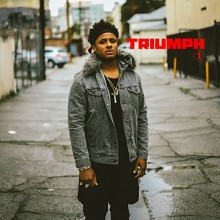 Drummer Ronald Bruner, Jr. is a musician who readers may have heard, but haven’t necessarily “heard of.”  A member of L.A.’s groundbreaking cohort of jazz fusion musicians, the West Coast Get Down, he is the brother of bassist Thundercat (Stephen Bruner) and former keyboardist for The Internet, Jameel Bruner, both of whom worked with Ronald on his new release. While his brothers may be more well-known, Ronald’s playing is a staple of Thundercat’s groundbreaking recordings, and his debut album, Triumph, indicates that his solo output will be strong in its own right.

As one would expect from the commercial success of members of the West Coast Get Down, the music on Ronald Bruner, Jr.’s new album is simultaneously pop-oriented and musically virtuosic.  This is perhaps jazz-fusion in its truest sense, drawing elements from R&B, hip hop and contemporary jazz into a musically interesting setting that is still heavy on radio-friendly grooves.

Recorded during the sessions that spawned fellow West Coast Get Down member Kamasi Washington’s The Epic, Triumph is an album that showcases two kinds of musicianship, often on  the same track. One of these kinds of musicianship finds its expression in pop-oriented R&B and the second allows the stellar musicians in Bruner’s band to showcase their chops.  Songs like “True Story” and “She’ll Never Change” are straight-ahead neo-soul tracks, and aside from the drum break that opens the former and the more active than usual playing on the latter, they could easily be mistaken for new cuts from mainstream R&B artists. Other numbers, like “Geome Deome” and “Open the Gate,” continue in the jazz fusion idiom outlined by virtuosic jazzers. These cuts (the former features the late, great George Duke on keys) hearken to the Al Di Meola Return to Forever days, with distorted guitar wailing over a bed of electric piano and start-and-stop drum grooves that are half Questlove, half Lenny White (who gets a shoutout on the album’s final song).

A stylistic chameleon, Bruner moves between styles within songs, morphing from locking in on the club jam “To You” to putting the trap set in the trap beat “For You” on the same track.  This is followed by the album closer “Chick’s Web,” a virtuosic jazz fusion track with a title that alludes to the great big band leader while blazing new trails for fusion drumming. This cut ends with a collection of shoutouts to everyone from family members to West Coast Get Down musicians (in some cases these are one in the same) to heavy-hitter jazz musicians that Bruner has been influenced by and worked with, including Stanley Clarke and Kenny Garrett.

Drummers need to hear this record because Bruner excels at pretty much any idiom a jazz fusion, funk, or R&B drummer might want to play. Bruner’s strength is in his diversity—Triumph is a jazz album that a pop fan can enjoy and an R&B record that has enough musical interest to keep a jazz head coming back for more. However, Triumph doesn’t fall into the “too diverse to be cohesive” trap that many similarly chameleonic albums do. This is a testament to how much Ronald Bruner, Jr. has to say as a musician and how well-refined his style is. This aptly titled LP is indeed a victory for Bruner and his band.