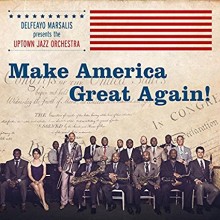 September’s new release by trombonist Delfeayo Marsalis is a strong, if jumbled, album full of social commentary, strong arrangements, and all-around great playing from the trombonist’s sturdy and compelling band.

While the album’s title, Make America Great Again!, is lifted straight from the headlines of the 2016 presidential race and suggests that Marsalis is shooting for penetrating political discourse (although a cynic might say this is a clever way to plug the album through serendipitous Google or Amazon hits), much of this release is simply a study in good jazz band writing.  There certainly are gestures at social commentary, including an excellent arrangement of “The Star Spangled Banner” as the record’s opening cut. The title track offers a fairly obvious critique of the even more simplistic Trump campaign slogan, pointing out the conspicuous problems with the “Make America Great Again” rallying cry, given the country’s (to be charitable) checkered past.  This cut features the voice talents of the great actor Wendell Pierce (The Wire, Treme); unfortunately, the spoken word he delivers offers very little insight into the problems really at the heart of the resurgence of far right-wing politics in America. Overall, it seems like Marsalis, an artist who specializes in a particularly historically-conscious approach to jazz, is simply preaching to the choir on this one.

This album’s real high points are those where the band plays its swinging heart out. Marsalis and company dig deep into New Orleans trad-jazz on “Second Line,” comb West African music, rap, and jazz on “Back to Africa,” call back to the height of dance bands on “Symphony in Riffs,” play what sounds like the Basie chart for “All of Me,” and they even include a backbeat arrangement of Aaron Copland’s “Fanfare for the Common Man,” complete with solo breaks. The Uptown Jazz Orchestra is a stylistic juggernaut, the album a veritable history book of American music. This compelling stylistic variety is largely due to the strength of the arrangements (by Kris Berg, Phil Sims, and Marsalis), but the absolute taste and skill of the players is not to be understated, either.

Marsalis and company’s music, rather than their political commentary, have the possibility to make American music great (again?). Without a doubt, this is the most stylistically diverse jazz album we will hear in 2016, a great alternative to the trite narratives we have heard from all sides of the political spectrum this year. I recommend turning off the news and putting on this record.