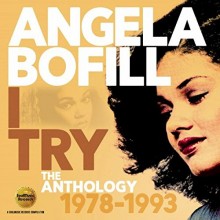 Angela Bofill should have been bigger than she was. The New York born singer of Cuban and Puerto Rican heritage had the voice. She could go from R & B to quiet storm to smooth jazz. Bofill was pre-Sade. She was pre-Anita Baker. In the late ’70s, she was well on her way.  But in recent years, Angela Bofill has been absent from the music scene due to two strokes—one in 2006 and another in 2007—which impaired her abilities as a vocalist. I Try: The Anthology 1978-1993, is a two disc set containing 34 tracks from Bofill’s career culled from her GRP, Arista and Jive releases. Compiled by British soul music historian David Nathan, this iconic singer’s collection comes with liner notes by A. Scott Galloway that are based on interviews with many of Bofill’s contemporaries. Some of these tracks were hits and if you were around, you can easily recall them; others, perhaps, you had no clue.

Disc one opens with the extended version of “Too Tough.” Produced by Narada Michael Walden, Bofill went for the dance crowd on this track, but some of her biggest fans felt that she got out of her lane, and before long—Poof. Bofill’s career started to fade away. I can understand trying new material, but on the other hand, if it ain’t broke, don’t tinker with it. “What I Wouldn’t Do (For The Love Of You)” was one of Bofill’s earliest hits, when eyes and ears were noticing her.  Her “Ain’t Nothing Like the Real Thing” duet with Boz Scaggs is a remake of the Marvin Gaye & Tammi Terrell classic. That’s the good thing about anthologies—you hear songs you never knew the artist recorded. “Angel of the Night” finds Bofill showcasing her Latino roots. When she starts singing in Spanish at the end, just flow with the vibe. Often, she was singing about herself and the smooth flow of the language highlights her fantastic tonal qualities.

Disc two contains more duets, including one with Johnny Mathis, “You’re A Special Part Of Me,” and with Carl Anderson on “A Woman In Love.”  Other collaborators include Stanley Clarke, Carl Anderson, Narada Michael Walden, and Marion Meadows—all unique to this specific compilation. You cannot end an Angela Bofill collection without her signature song, “I Try.”  If you ever happened to see Bofill live, then you know what this song means to her. Turn it up and sing along.

It’s a shame that Bofill never reached the heights that some of her contemporaries eventually achieved. It’s even sadder that her health has affected her career the way it has. However, thanks to this anthology we can appreciate what Bofill was able to offer and enjoy her music forever.