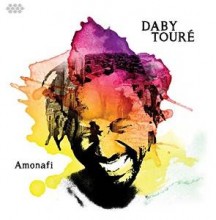 Daby Touré delights in his many identities, calling himself an “Afropean”; although he was born in Mauritania and raised in Senegal, he has now lived over half his life in Paris. Despite the wishes of some people for him to be a “traditional African artist,” he always loved listening to pop, and was inspired by Stevie Wonder, The Police, and Michael Jackson. He has made a career out of his genre-bending and –bridging music. His fifth album, Amonafi, which means “once upon a time” in Wolof, aims to show Touré’s unique vision of Africa, through embracing these multiple musical and cultural lenses.

The album traverses many topics and periods of history. The opening track, “Woyoyoye (A Cry)” describes a love story in the village Touré grew up in. “Amonafi (Once Upon a Time)” is about slavery, and how it changed a people who were once at one with nature into a nation “adrift.”

Amonafi also has many songs about the struggles of women, often discussed in Touré’s eloquent storytelling and songwriting. For instance, “Debho (Women)” is a tribute to women who he fears “bear the weight of our whole society.” “Oma (Call Me)” is about migration, but based on a story a Romanian woman told Touré near his Paris home:

These stories and masterful lyricism are coupled with powerful music that seasoned with folk flavors, soul, and Afropop. One song that Touré wrote with his father, “Khone (Enemy)” is actually an excerpt from a Black Power-inspired opera they created, with the album version of this song performed acapella.

Amonafi is another striking work of art from Daby Touré, mirroring his multifaceted world view and representing a fresh perspective on African history, life, and music.