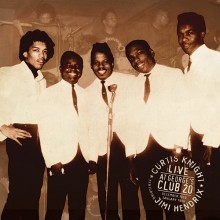 Just in time for Record Store Day on April 21st, Dagger Records has released Curtis Knight featuring Jimi Hendrix – Live At George’s Club 20.  This compilation includes tracks that up to this point have mostly been available as bootlegs for the Jimi Hendrix completist. Dagger’s official release features fully remastered audio and a 10 page liner note booklet with rare photos and insight into Hendrix’s career during this period.

Live At George’s Club 20 includes tracks recorded in 1965 and 1966, which find Hendrix in his rhythm and blues era, then known as Jimmy James—a member of Curtis Knight’s pre-Squire’s band the Lovelites. The songs included here are primarily covers including Howlin’ Wolf’s “Killing Floor,” Marvin Gaye’s “Ain’t That Peculiar” and Ray Charles’ “What’d I Say.”

Many of the tracks feature Jimi on vocals as well guitar, and it easy to hear hints of the artist he would become just a few years later. Still in his early twenties, Hendrix’s chops were as impressive as you might expect for one of America’s greatest guitar heroes. On “Driving South” he flexes his guitar skills in fantastic fashion as Knight shouts out the names of cities. It’s not hard to imagine a smoky club of dancers responding ecstatically to the storm the band (including bassist Ace Hall, drummer Ditto Edwards, and saxophonist Lonnie Youngblood) had brewed up. Hendrix even includes the playing guitar with his teeth routine that would wow the crowd at the Monterey Pop Festival just a few years later. Many of the recordings also showcase Hendrix’s humor and showmanship as well. For example, “I’m a Man” features Hendrix’s playful singing and lyric swapping during a rendition of the Muddy Waters standard.

While Live At George’s Club 20 is a collection for Hendrix completists, it is still a worthwhile listen for anyone who is interested in deconstructing the notion that Jimi Hendrix “came out of nowhere.”  It was places like Club 20 where he honed his chops on his way to super stardom and this compilation is a great listen.