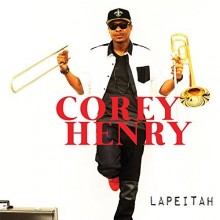 Corey Henry was raised in the birthplace of jazz—New Orleans’s Treme neighborhood. Inspired by his environment and musical family, Henry started learning trombone at the age of 10, and by age 16 he was hired to play with the Treme Brass Band. Since then, he’s become a vital part of the New Orleans jazz scene, performing with his Little Rascals Brass Band and the nationally touring jam band Galactic. Last September, Henry released his solo debut, Lapeitah, out on Louisiana Red Hot Records. Produced and co-written by Brian J., Lapeitah includes nine originals and one cover that showcase modern New Orleans funk at its finest.

There are a number of guest stars on Lapeitah, including alto saxophonist Greg Thomas (George Clinton & Parliament Funkadelic). Thomas plays on the exuberant “Muddy Waters” (below) and the soulful “We Got the Funk,” both of which share vocal choruses straight out of 1970s funk scene. Thomas is also featured on the instrumental “Get Funky,” which displays the connections between jazz and funk in a playful call and response between varying soloists and the rest of the musicians.

The album also features a number of guest vocalists, such as Corey Glover (Living Colour) on an impressive hard rock cover of Jimi Hendrix’s “If 6 Was 9.” Glover’s gritty vocals, which at times dissolve into rock star shrieks, are echoed by the timbre of Henry’s raw, relentless trombone solo. Nowhere is Henry’s New Orleans origin more evident than on the original “Baby C’mon,” featuring vocals by Cole “Ms. Cake” Williams. This funky, upbeat second-line pride song is perfect for Mardi Gras celebrations in Henry’s hometown.

The fusion of jazz and funk makes Lapeitah a joyful, celebratory outpouring of two of New Orleans’ most famous musical cultures. While the songs may sound carefree, the carefully curated songwriting and talent that Corey Henry and Brian J bring to the album prove that Henry is a force to be reckoned with in the New Orleans jazz and funk world.