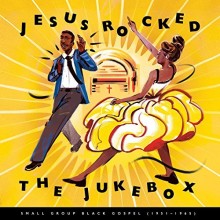 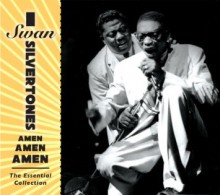 Amen, Amen, Amen: The Essential Collection is an inspired re-issue by the Swan Silvertones—once referred to by guitarist Al Kooper as the “Beatles of gospel”—whose voices and arrangements raise this collection to heavenly heights. The recordings on this collection were first issued on Specialty and Vee-Jay Records between 1950 and 1963, and now reissued on S’more Entertainment/Rock Beat Records.

Leading the Swan Silvertones during this period was Claude Jeter, an anointed tenor born in Montgomery, Alabama in 1914. While the group’s line-up changed in 1956 and 1959, Claude Jeter’s leadership remained steadfast during the thirteen years highlighted on Amen, Amen, Amen. Thus, these recordings become a spotlight of Jeter’s artistic contribution to the Swan Silvertones and allow listeners to hear the evolution of his voice, as well as his ensemble.

“The Day Will Surely Come,” the “A side” of the group’s first single on Specialty in 1952, demonstrates Jeter’s smooth lead tenor and songwriting abilities. Jeter’s genius—his sweet vocal falsetto—is heard in the brilliant rendition of “I’m Coming Home,” recorded just a year later. Jeter’s soaring falsetto—as well as the musical excellence of the Swan Silvertones—is perhaps best exemplified through “Mary Don’t You Weep,” released by Vee-Jay in 1959 and selected for induction into the Library of Congress National Recording Registry in 2014. Throughout these recordings, the accompanying singers and instrumentalists in the Swan Silvertones provide a foundation, both swinging and solid, for the lead voices of Jeter, Soloman Womack, Rev. Robert Crenshaw, and Paul Owens, to praise the Lord.

Despite the quality of these recordings, the packaging of Amen, Amen, Amen: The Essential Collection leaves the reader wanting more. A glaring omission is the presence of captions on the included photographs, leaving readers puzzled as to the date of the images and individuals pictured. This is especially puzzling as the album’s producer, Michael Ochs, is a noted photographic archivist specializing in music photography. Strengthening this collection are Mark Humphrey’s liner notes, which provide a focused overview of the Swan Silvertones during the time of these recordings.

Claude Jeter is cited as an influence by a number of iconic American musicians such as Al Green and Paul Simon—the latter of whom credits Jeter with inspiring the Simon and Garfunkel classic, “Bridge Over Troubled Water.” Amen, Amen, Amen: The Essential Collection serves a timely reminder that Claude Jeter’s falsetto, as well as the musicians in the Swan Silvertones, cannot be overlooked in histories of sacred, and secular, American popular music.