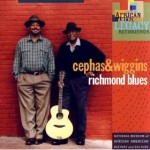 Release date: July 29, 2008
–
The guitar and harmonica pairing of John Cephas (guitar) and Phil Wiggins (harmonica) is a sound familiar to fans of the great Brownie McGhee and Sonny Terry, but these days the blues stylings of the Piedmont region (the Appalachian foothills that run from Richmond to Atlanta) get less attention than the electrified virtuosity of Chicago blues players, or the so-called “authentic” allure of Delta Blues players. This could be because Piedmont Blues doesn’t always sound like “the blues.” Sometimes it sounds like country, other times like ragtime, and sometimes like folk balladry, and that’s precisely what makes Richmond Blues so much fun to listen to.

The diversity of sound is not a novelty, nor is it extreme, and a thorough listening will ground the sound of the record in the blues for sure: the blue notes on the guitar, the wailing bends on the harmonica, and AAB blues structure of many of the songs, and the overall down and out theme reminds the listener that this music was born from hard times, but played to ease them. Built around Cephas’s finger picked acoustic guitar and singing, accentuated by a second “voice” of Wiggins’s harp, Richmond Blues rolls along from the opening title track, through blues classic “Going Down the Road Feeling Bad” to the romp “Step It Up and Go,” all the while keeping your foot tapping. In addition to the up-tempo stomps, they slow it down for the plaintive, “Prison Bound Blues,” and a take on the classic “Careless Love” that may break your heart.

Cephas and Wiggins, who have been playing music since they were children, and playing together since the late 1970s, have been a mainstay in the Virginia/D.C. area for years, and have had great exposure at the Smithsonian Folklife Festival in Washington. This latest release, their 14th together but the first for Smithsonian Folkways, captures the live spirit that makes you wish you had run across these master musicians busking on the street corners. As described by their long time producer Joe Wilson as “urban acoustic blues,” their music is at once tradition, and thoroughly modern.

Richmond Blues is released through Smithsonian Folkways as part of their new African American Legacy Series, an effort in anticipation of the Smithsonian National Museum of African American History and Culture, and shows great promise for future releases of master musicians that exemplify styles and traditions not always recognized by less sophisticated and informed labels. Liner notes are provided by scholar and writer Barry Lee Pearson, whose book Virginia Piedmont Blues chronicled Phil Cephas in great detail. The notes provide information about the performers, their history of learning and playing music, as well as a brief but well written history of the Piedmont Blues tradition. In addition, each track is given a short biography as to who played it before, how it was played, and how it fits into Cephas and Wiggins’ repertoire. As a nice bonus for musicians listening, it also indicated what key each song is played in.

Richmond Blues is a rare treat, and one that transcends the dedicated blues fan-base and could appeal to a great variety of roots music fans, without in any way compromising the music. It’s unfortunate that regional styles like this, played by working musicians are often relegated to the small labels that need some detective work to find. Smithsonian Folkways has once again offered music the broader public might not otherwise hear (like they did with Brownie McGhee and Sonny Terry, as well as countless others) and should be commended for it.