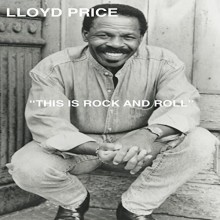 Title: This Is Rock and Roll

Lloyd Price’s career may have launched way back in 1952 with the famous single “Lawdy Miss Clawdy,” but his newest release proves that his career is far from over. This Is Rock and Roll, Price’s first album in over a decade, includes a combination of newly penned original tracks, like the bluesy “I’m Getting Over You,” as well as a collection of covers.

The title track exemplifies the album’s balance between originals and covers, combining Jimmy Reed’s “Peepin’ & Hidin’” with Price’s celebratory call-and-response “This is rock and roll.” This song is significant to the album as a whole, as it was recorded in the New York City club where, three years ago, Price decided he still had much to offer fans and conceived this album.

For his slowed-down cover of Carole King’s “Will You Still Love Me Tomorrow,” the legendary Rock and Roll Hall of Famer turns the song into a ballad sung from a man’s point of view. Regardless of whether it’s an original or a cover, each track on This Is Rock and Roll contains the unique Lloyd Price essence that has been captivating listeners for over 60 years.