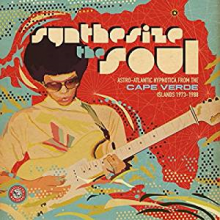 Ostinato Records’ latest compilation, Synthesize the Soul: Astro-Atlantic Hypnotica from the Cape Verde Islands 1973-1988, gives an “alternate history” of the electronic music that dominated popular music by the late 1990s. Rather than emerging from a big city, Synthesize the Soul begins in the archipelago 400 miles off the Senegalese coast known as the Cape Verde Islands.

After independence from Portugal in 1975, Cape Verde suffered financially while trying to fit into an increasingly globalized world. As a result, there was an intensification of immigration to Europe and the United States. As musicians began travelling back and forth between these countries and their home islands, they brought synthesizers and MIDI instruments with them. The rhythms of rural farms previously played on accordions began to be transposed to synthesizers, birthing a new era and style of music for Cape Verde.

The Ostinato Records compilation out later this month features a number of important songs and artists from this era, including Manuel Gomes and Tchiss Lopez, whose song “É Bô Problema” can be heard on Soundcloud below:

The mix of electronic disco beats, Latin-inspired rhythms, and West African instrumentation present on the album illustrate the blending of cultures and complex history that makes the Cape Verde islands so unique. Synthesize the Soul aims to firmly place the music emanating from Cape Verde into the history of popular electronic music as we know it. Ostinato describes the music as an “unknown, ultra-progressive sound” for its time, putting a spotlight on the oft-forgotten artists from the islands who brought their musical traditions with them across Europe, from Lisbon to Rome and Naples, in the 1970s and ‘80s.