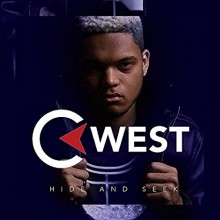 C West has potential to take the gospel world by storm with his debut album, Hide and Seek. The 20-year-old singer and guitarist incorporates a very contemporary R&B sound in his faith-based inspirational songs directed towards millennials. According to West, the album’s title references how we tend to hide from ourselves and from God, instead of seeking our true purpose.

While studying at Villa Maria College in his hometown of Buffalo, New York, West competed in a singing contest sponsored by the well-known gospel producer Marquis Boone, who launched the careers of the chart topping Tyscot artists Briana Babineaux and Casey J. West went on to win the competition taking first prize, a recording contract with Tyscot Records. Now, with help from Boone, who is also his new manager, West is looking to push the envelope and merge mainstream styles with a spiritual message.

C West released multiple singles prior to dropping this album, including the ballad “Breaks Your Heart,” which he describes as starting out as a prayer written on a sticky note. Following was his first hit song, “Focus,” which quickly became one of the most frequently played songs on gospel radio. This also happens to be West’s favorite song because it sends a message about the benefits of staying focused: “The end will be worth it.”

Other tracks such as “Who I Am” and “Unusual Love” speak to finding yourself and your way through the world as young man or woman of God. As C West’s debut album, Hide and Seek signals the start of promising career and another win for Tyscot Records.