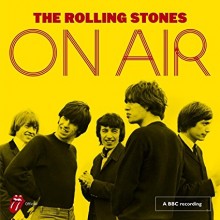 Like most British Invasion bands, The Rolling Stones started out covering American music. In the Stones case, there was an immediate affinity for blues, particularly the electric variety from Chicago’s African American musicians. Indeed, the band took its name from a Muddy Waters song. The band also gravitated to the rock ‘n roll artists from Chicago’s Chess Records, particularly Chuck Berry and Bo Diddley.

Unlike most of their peers, the Stones never veered too far from their roots. They completely absorbed the loose style and ironic lyrics of their Chicago influences, and never stopped including cover versions of African American blues, soul and early rock songs on their albums. In fact, their most recent studio album, Blue and Lonesome, is a tribute and return to their blues roots.

Back at the time when the British Invasion bands were forming, the BBC presented hours of live popular music on both radio and TV. Bands like the Beatles, Rolling Stones, Kinks, Zombies and others were able to play in front of a national audience, a hugely expanded stage from the small clubs where they honed their craft. On Air collects the Stones’ BBC performances from 1963-65, with a bonus of restored sound and a nice booklet essay by Richard Havers.

By the time they took to the airwaves, even in 1963, less than a year after forming, the Stones were a tight ensemble. The original band—Mick Jagger, Keith Richards, Brian Jones, Charlie Watts and Bill Wyman—had a coherent and shared musical vision and were at ease playing together. They weren’t yet capable of the musical fury needed for some of the songs they were covering, but they tried hard.

The Stones were at their best covering Chuck Berry and Bo Diddley, able to use the faster pace of true rock ‘n roll to their advantage. On the slower bluesier material, and also, curiously, on their original tunes, these performances aren’t up to the polish and energy of contemporary studio album tracks. That could be due to the tight schedule and lack of rehearsal time for BBC productions. In any case, the highlights are their covers of Berry’s “Around and Around” and “Carol,” which became staples in the Stones’ live repertoire through the ‘70s and ‘80s; plus Diddley’s “Cops and Robbers,” “Crackin’ Up” and “Mona.” Among the originals, a highlight is the last track on the album, the instrumental “2120 South Michigan Avenue.” The song title pays homage to Chess Records’ studio address. Early highlights in the Stones’ long and storied career were recording sessions at Chess Studio, in 1964 and 65.

Some of this music was previously released as part of a BBC-produced radio documentary, “The Rolling Stones Story.” A red-vinyl promotional LP contained “Cops and Robbers,” “Memphis Tennessee,” “Roll Over Beethoven” and “Fannie Mae.” The sound quality on that LP was not anywhere as good as this new 2-CD set.

The CD credits “demixing” engineer James Clarke, who also worked sonic miracles with the Beatles’ live performance recordings for Ron Howard’s “Eight Days A Week” documentary and the CD reissue of their Hollywood Bowl concerts. The Abbey Road engineers were able to “demix” (isolate each instrument, clean up the noise around it and put it on a separate digital track), then remix some of these original-mono recordings into stereo. The resulting sound is clear, but there is a “skeletal” feeling to it, like the band has been separated too much, losing some of the energy and cohesion. I would have preferred new mono mixes, with each instrument and vocal “scrubbed” of noise and distortion. The power and synergy of a clean mono mix is unbeatable, especially with this material.

On Air is a must for a Stones fan, because it shows the band outside of the studio in its earliest form, young and hungry and building toward bigger things. For a fan of British Invasion music, the Stones offer a master class in how it’s done. The album also documents some of the Stones’ earliest covers of Black music, which underpinned the transformation of their sound during the 1960s.

Editor’s Note: We’re featuring this album as part of our ongoing exploration of the Black roots of rock ‘n roll, an initiative begun in 2009 with the conference “Reclaiming the Right to Rock: Black Experiences in Rock Music.”  For further reading we recommend Maureen Mahon’s book, Right to Rock: The Black Rock Coalition and the Cultural Politics of Race (Duke University Press, 2004).