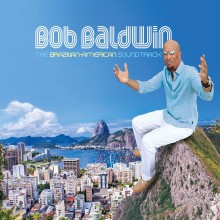 Most of the album’s tracks were penned by Baldwin (alone and in collaboration with other band members), who set out to honor some of the iconic artists who have influenced him over the years. These include the late composer Antonio Carlos Jobim, one of the originators of the bossa nova style whose work “Corcovado/The Redeemer” is featured on disc one, along with several works by Brazilian popular music songwriter Ivan Lins, including “Anjo De Mim,” “The Island” and “Love Dance” are also included.

Moving over to the second, New York half of the project, the overall vibe is on smooth grooves, though Latin percussion still provides a solid foundation. Baldwin works in several tributes to one of his musical idols, the late Maurice White of Earth, Wind & Fire. The track “Maurice (The Sound of His Voice),” calls to mind the vocal riffs on EWF’s “Brazilian Rhyme,” and the closing track, “The Message,” includes Baldwin’s heartfelt spoken tribute to White, recorded shortly after news of his death was received.

Though summer is on the wane, this delightful project from Bob Baldwin promises to keep the tropical vibe alive well into the future. 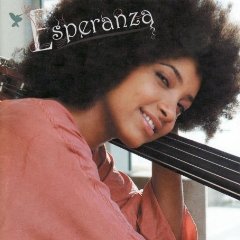 Esperanza Spalding is a talented 24 year-old bassist-vocalist on the fast track to fame. With a background of baccalaureate studies at Boston’s Berklee School of Music, the distinction of becoming the youngest person ever to hold a teaching position at the same university, and her second CD release entitled Esperanza, Spalding is attracting excitement on the international level. Beyond her prodigious talent, including bass and vocal scat chops that cannot go unnoticed, Esperanza demonstrates the bassist/singer’s youth on a number of levels.

Esperanza covers a lot of territory: songs performed in English, Spanish, and Portuguese; musical genres or elements thereof derived from jazz, R&B, and Brazilian popular music; and, of course, Spalding’s contrapuntal use of bass and voice. She performs vocally at her best on two Brazilian songs-a newly arranged rendition of Milton Nascimentos’ “Ponta de Areia,” and “Samba em Preludio” by Baden Powell, on which a sensitive Spanish guitar performance by Niño Josele helps to bring out the singer’s more relaxed and sensuous qualities. The sole jazz standard, a medium tempo rendition of “Body and Soul,” is sung in Spanish and contrasts a bass ostinato section with a “straight ahead” (conventional driving-rhythm, small-combo) jazz style and Spalding’s scat singing. It’s not clear why these stylistic choices were made, other than to demonstrate that Spalding and group indeed have the technical skill to pull it off, if not contribute anything special.

The majority of the repertoire comprises Spalding’s compositions. These reflect popular R&B styles—think Alicia Keys with a touch of jazz—and unfortunately this is not Spalding’s strength. In general, jazz vocal nuance is missing and Spalding’s bass playing—her strongest talent (at least at this early point of her career)—perhaps could have been highlighted more.

A clear display of talent and youth, Esperanza leaves one hoping that the music industry and the public’s hype will not interfere with the time and focus necessary for Spalding to develop naturally and achieve her full potential. That just may be something worth waiting for.

Here is the promotional video for the album (courtesy of Telarc):