Following are recently published books in the genres of jazz, soul, R&B, and rap music that made our short list. 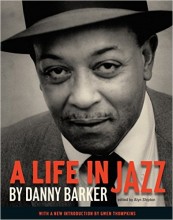 Title: A Life in Jazz

Just in time for the holidays, this new illustrated edition of the 1986 biography of New Orleans musician Danny Barker would make a wonderful gift for any jazz fan. Published as volume three in the Louisiana Musicians Biography Series from The Historic New Orleans Collection, this new edition is supplemented with 115 images that illuminate Barker’s story, plus a complete discography and a never-before-published song catalog. As one of the elder statesman of jazz, Danny Barker (1909-1994) appeared on more than a thousand recordings and wrote dozens of original songs including his biggest hit, “Don’t You Make Me Feel High [Don’t You Feel My Leg],” sung by his wife, Blue Lu Barker. He was also the first to record classic Mardi Gras Indian songs and chants, writing his own adaptations of “My Indian Red,” “Corinne Died on the Battlefield,” and “Chocko Mo Feendo Hey.” Barker’s bio is chock full of stories harkening back to the roots of jazz in New Orleans, as he reflects on “the freedom, complexity, and beauty of this thoroughly American, black music tradition.” A truly inspirational story, and a wonderful follow-up to Vol. 2 in the series, Ernie K-Doe: The R&B Emperor of New Orleans.

Perhaps one of the most highly anticipated music books of the year, this new biography of soul music icon Curtis Mayfield is told from the perspective of his second-oldest son, Todd Mayfield, with assistance from noted music writer Travis Atria. They certainly don’t disappoint. Far from the typical tell-all, the authors offer a well-crafted, in-depth and extremely compelling account of the singer-songwriter that reads more like a novel. Chapter titles often reference Mayfield’s songs, providing insight into the source of his lyrics. For example chapter two, “My Mama Borned Me in a Ghetto,” includes lines from his autobiographical song “Kung Fu”: “My mama borned me in a ghetto / There was no mattress for my head / But, no, she couldn`t call me Jesus / I wasn`t white enough, she said.” In this manner, Mayfield’s life is traced from the streets of Chicago to the formation of the Impressions and his label Curtom Records. Later chapters cover his political activism and socially conscious songs that became forever linked to the Civil Rights Movement. But with the good comes the bad, and the authors don’t shy away from addressing the more volatile aspects of Mayfield’s personality, or describing the pain and suffering that followed the tragic accident in 1990 that left him paralyzed. A must read for any fan of soul music.

Maurice White, who founded Earth, Wind & Fire in 1970 with his brother Verdine White and Philip Bailey, sadly passed away on February 3, 2016, just as his autobiography was completed. Peppered with personal stories, Maurice also sheds light on production details while providing an overview of the band’s albums and singles. Known for his spirituality as well as his musicianship, Maurice addresses both the sacred and the secular, providing a full account of his influences. The gifted singer-songwriter, producer, arranger and bandleader left an indelible mark on American music, and thankfully decided to share with us the final chapter in his remarkable life.

Award-winning journalist Ben Westhoff, author of the 2011 book Dirty South on southern hip hop, now turns his attention to the West Coast for a definitive history of California’s hip hop pioneers. Released on the 20th anniversary of Tupac Shakur’s death, Westhoff traces the rise of N.W.A. as the voice of disenfranchised African Americans, the formation of Death Row Records, the rise to superstardom of Snoop and Tupac, and the rivalries between East Coast and West Coast factions. Of equal importance, he delves into changes in the music industry and music consumption in general, which brought gangsta rap into the mainstream. Based on extensive interviews with 112 different sources, Westhoff’s latest effort is essential reading for those interested in the history of the genre.

Village Voice writer Greg Tate is widely recognized as one of the premiere voices on contemporary Black music, arts and culture. Not only is he a writer and “prose stylist” extraordinaire, but Tate actively performs as a guitarist/conductor with the New York based collective known as Burnt Sugar The Arkestra Chamber.  Like Tate’s Flyboy in the Buttermilk (1992), this volume is a collection of his writings, divided into 5 sections: “The Black Male Show” which focuses primarily on musicians ranging from Jimi Hendrix and Miles Davis to Ice Cube and Lonnie Holley; “She Laughing Mean and Impressive Too” covering Sade and Azealia Banks as well as Black feminists, writers and poets; “Hello Darkness My Old Meme” offering wide ranging essays on hip-hop, jazz, and Black culture; “Screenings” focused on the films of Spike Lee and John Singleton, among others; and “Race, Sex, Politricks, and Belles Lettres” which is something of a catch-all for other works. An enjoyable read that you can digest as a whole or in parts, while marveling at Tate’s ability to turn a phrase while dissecting race, class and gender in America

Title: UP From Where We’ve Come

Mississippi born singer/songwriter Charles Wright has been a fixture in the music business for over fifty years. As leader of the Los Angeles based Watts 103rd Street Rhythm Band, Wright penned the band’s mega hit song, “Express Yourself,” that is still frequently heard today. His new book is described as part autobiography and part novel, with each of the 59 chapters offering a short vignette drawn from life stories. Beginning with his family’s trials and tribulations as sharecroppers on a cotton plantation where, by the age of eight Wright was forced to pick 100 pounds of cotton a day, the book traces the family’s relocation to California; but unfortunately the “sharecropper mentality” follows. Those who want to learn more about Wright’s music career will be disappointed. But if you want to be inspired by Wright’s struggles to succeed in the face of adversity, he offers a powerful, first person narrative focusing primarily on how “the machinations of capitalism and personal vendettas unified to entrap the working class, and their families, into an endless cycle of debt and destitution.”