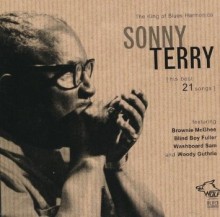 The joy of Wolf Records International’s release of a new Sonny Terry compilation is that the harmonica player and singer’s talent is allowed to take center stage. While his later recordings were mostly in a duo format with guitarist Brownie McGhee—who does appear on the album—His 21 Best showcases many of Terry’s recordings released before World War II. The result is a powerful document of the musician’s playful, sometimes falsetto, voice and his mastery of the blues harmonica.

Terry could make the harmonica be an instrument for rhythmic accompaniment, a stand-in for the human voice, and a ready-to-lead melodic instrument for improvisation. A range of collaborators—including Woody Guthrie, Blind Boy Fuller, Washboard Sam, and the aforementioned McGhee—augment this release, to mixed results. The album feels, at times, to be thrown together and under-curated. Many cuts seem to be studio outtakes that would make the diehard fan ecstatic, but leave new listeners underwhelmed. Despite this weakness, the album serves as a strong reminder of just how much Terry’s influence can be heard in blues harmonica players to this day.