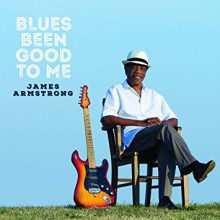 Title: Blues Been Good to Me

Blues singer-songwriter and guitarist James Armstrong grew up in southern California during an era when Jimi Hendrix reigned supreme. This spurred his fascination with rock and roll, but he also developed an interest in country music and slide guitar, which he later mastered. But that’s not all. Armstrong’s mother was a blues singer and his father played jazz guitar, providing him with more than a passing familiarity of these genres. Apparently the maternal influence won out, because Armstrong hit the blues circuit at a young age and never looked back. Until now.

Blues Been Good to Me, Armstrong’s third release for the Catfood label, is the output of a musician reflecting upon his life and times. He hooked up with another blues veteran and label mate, Johnny Rawls, to co-produce the project. Band members include rhythm guitarist Johnny McGhee (a founding member of L.T.D.), drummer Andrew Blaze Thomas, and keyboardist Matt Murdick, with Darryl Wright on bass. The album opens with the title track, an autobiographical song that chugs along over a B3 courtesy of Brother John Kattke, a Chicago blues musician perhaps better known as a guitarist.

The opening bars of “Second Time Around” will be instantly recognizable to the Boomer generation as the “Secret Agent Man” theme song. By the time the backup singers chime in on the chorus, we’re certainly convinced that love is indeed better on the rebound. Another sweet spot is the slow grooving “Early Grave,” a song about a man so tormented by a woman that he worries about dying young, joining the likes of Elvis, Robert Johnson, Sam Cooke, Marvin Gaye, and O.V. Wright.

All of Armstrong’s original songs are outstanding. There’s the funky groove of “Old Man in the Morning (Young Man at Night),” the melancholy ballad “Change in the Weather” with its tasty guitar solos, and “Sleeping With a Stranger,” an excellent showcase of Armstong’s songwriting and musicianship. Last but not least, there are the covers: Marvin Gaye’s “How Sweet It Is To Be Loved By You” gets a countrified arrangement, while Robert Palmer’s “Addicted to Love” is anchored by a honkytonk style piano and rousing horn section.

James Armstrong draws upon his multiple musical influences, infusing Blues Been Good to Me with a level of sophistication above and beyond the typical blues project. This is my first introduction to his music, and I will be looking forward to future releases.