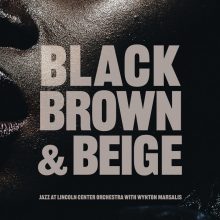 Jazz at Lincoln Center Orchestra captures and invokes the spirit of Duke Ellington with their release of Ellington’s masterwork, Black, Brown and Beige. The album is a live recording from a performance at the Rose Theater in 2018 with special guests Brianna Thomas (voice) and Eli Bishop (violin). Originally composed for the first of Ellington’s annual concerts in Carnegie Hall and premiered on January 23, 1943, the epic work is considered a seminal musical composition of the 20th century and in Ellington’s words, “is a parallel to the history of the American Negro.” While some parts of the suite were revised and recorded by Ellington after the premiere, the full-length version of the 1943 concert was not released until 1977, three years after his death. Now the Jazz at Lincoln Center Orchestra with Wynton Marsalis imbues new life into Ellington’s jazz symphony with a modern interpretation of the complete work that’s full of creative colors and intensities.