Following are additional albums released during August 2019—some will be reviewed in future issues of Black Grooves. END_OF_DOCUMENT_TOKEN_TO_BE_REPLACED 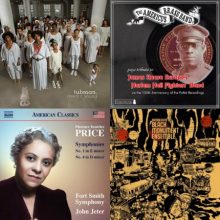 Welcome to the August 2019 issue of Black Grooves, sponsored by the Indiana University Archives of African American Music and Culture.

Our featured projects this month include The Americus Brass Band’s Tribute to James Reese Europe’s Harlem Hell Fighters’ Band on the 100th Anniversary of the Pathé Recordings in which they recreate the music performed during the 1919 recording sessions, and Florence Beatrice Price’s Symphonies No. 1 and No. 4 performed by the Fort Smith Symphony under the direction of John Jeter.

Wrapping up this issue is Missing Chapters from the Atlanta-based Cameroonian-born artist Moken, and our list of July Black Music Releases of Note.