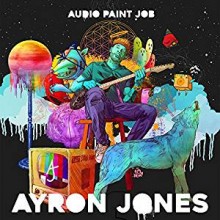 When Seattle power rock trio Ayron Jones and The Way burst onto the scene in 2013 with their Sir Mix-a-Lot produced debut album The Dream, the band was suddenly propelled from playing Northwest dive bars to opening for B.B. King, Robert Cray, Run-DMC and Living Colour. Now, four years later, Jones has new personnel in his band as well as a new producer— ethnomusicologist and drummer Barrett Martin (Screaming Trees, Mad Season, Walking Papers).  His sophomore album, Audio Paint Job, is more of a solo project, with Jones credited as singer/songwriter across the 14 tracks mixed by Jack Endino (Nirvana, Soundgarden). As for The Way, current band members Ehssan Karimi (drums) and Bob Lovelace (bass) are featured prominently but not exclusively, while former members—bassist DeAndre Enrico and metal drummer Kai Van De Pitte—also make an appearance. Barrett Martin adds percussion to the majority of the tracks, with occasional forays on the Wurlitzer, vibraphone, piano and backing vocals.

On Jones’s latest project, the Hendrix-inspired guitarist draws upon other iconic elements of the Seattle music scene past and present, including grunge and punk, seasoned with a heavy dose of soul and a pinch of hip hop.  As for the album title, Jones explains: “Audio Paint Job . . . has multiple meanings for me. It’s a story about my mental and spiritual transformation through music.” Overcoming obstacles is a constant theme throughout, as Jones’s songs chronicle his personal struggles: life in the spotlight, a divorce, and the loss of a family member from drug and alcohol addiction.

The album kicks off with the powerful rock ballad “Take Me Away,” which successfully incorporates a surprisingly diverse sonic palette. Opening with the percussive sound of a typewriter “performed” by Barrett Martin like a modern day Ernie Pyle, the song progresses through a guitar duel between Jones and Lovelace, scratching by DJ Indica Jones, and a lush string arrangement courtesy of Andrew Joslyn. On the edgy ballad “It’s Over When It’s Over,” Jones switches to a 12-string acoustic guitar accompanied by vibes and strings, reinforcing the melancholy mood.

An obvious favorite, the band’s theme song “Boys From the Pudget Sound” features original members Van De Pitte and Enrico. This ode to Jones’s hometown perfectly encapsulates the Seattle vibe, as he disses transplants to the city: “you say you love stormy weather, but child you can’t stand the rain.” The hard rocking track showcases Jones’s guitar chops, while soaring “opera vocals” by Johnathan Wright and percussion by Barrett Martin add to the texture.

B Anthony Nelson (People Zoo Art Works) offered to produce the video for the album’s first single, “Love is the Answer,” which Jones wrote as a message song for turbulent times: “A reminder that while we all experience and perceive different things in our daily lives, we are made of the earth, that’s made of the sun, that’s made of our galaxy, that’s made of the universe. We are the universes. If we want to see a change in our lives, or in the lives of others we must become and project what we wish to see in our world. Love is The Answer” (Paste, 2017).

Additional highlights include the powerful protest song “Stand Up (Take Your Power Back)” and “Lay Your Body Down,” the latter featuring extended guitar solos with psychedelic effects. The album concludes with the slow burner “Yesterday,” which harkens back to ‘60s soul with Joe Doria taking us to church on the B3.

Though already well-known on the West Coast, Ayron Jones will no doubt increase his fan base with his latest album. Audio Paint Job explores a wide range of styles, delivering a sound that’s steeped in the past yet acutely attuned to the present, both musically and thematically. Black rock returns to Seattle!