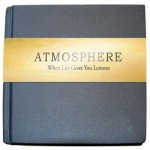 The Minneapolis group Atmosphere has been an underground powerhouse for over a decade. While never scoring a hit single or album, the group has been able to secure a legion of dedicated fans all over the world. Consisting of rapper Slug (Sean Daley) and producer Ant (Anthony Davis), Atmosphere’s music ranges from the most abstract to the extremely personal. Over the last two years, Atmosphere has released a string of EPs, building up anticipation for their new album, When Life Gives You Lemons, You Paint that Shit Gold, released on their own Rhymesayers Entertainment label.

Atmosphere took a minimalistic approach on this CD, a switch from their previous full length album, You Can’t Imagine How Much Fun We’re Having (2005). The sound moves back and forth between somber and mellow, as Slug teaches life lessons with his unintentionally poetic rhyme style. The album’s tone is set by the opener “Like the Rest of Us,” which features Slug musing about life over sparse drums and an atmospheric piano part. “The Skinny” is a cleverly disguised song about cigarette abuse. “Shoulda Known” is the album’s lead single and has Slug rhyming about his favorite topic, dysfunctional relationships.

“Painting” opens the heart of the album. On this song, Slug brings you into the dark recesses of depression over a majestic beat centered around a magnificent lap steel guitar performance. The up-tempo “Your Glasshouse” finds Slug vividly depicting the state of being hungover, aided by a menacing synthesizer melody. The next song, “Yesterday,” is by far the album’s best track and definitely one of the strongest songs in Atmosphere’s catalogue. Slug is at his best when he lyrically presents emotions that the typical person struggles to simply comprehend, let alone put into words. “Yesterday” is the perfect example of this. When initially listening to the song, it sounds like one of his typical tracks about an ex-girlfriend. The final lines reveal that he is speaking to a recently deceased father, whether it is his or not is unknown. When paying careful attention to the lyrics, you see that Slug is presenting a cautionary tale about what can happen when we get too consumed with our own lives. During one particularly compelling moment in the song, Slug raps:

And when you left, I didn’t see it comin’
I guess I slept, it ain’t like you was runnin’
You crept out the front door slow
And I was so self-absorbed I didn’t even know

The narrator was so self-absorbed that he did not realize his father was dying until it was too late. Slug appears to warn the listener against being so engrossed by their own lives that they neglect the world around them. Later in the song, the narrator says to his deceased father, “Leaving me is the probably the best thing you ever taught me.” So, in a redemptive manner, the narrator learns to embrace life through the death of his father. Slug’s thoughtful lyrics combined with a beautifully simple piano-laden backdrop makes “Yesterday” one of the best hip hop songs in recent years.

The album closes with a number of strong tracks including “Guarantees,” “The Waitress,” and “In Her Music Box.” Aside from the very mild redundancy in terms of beat and content, this is a flawless album. Atmosphere has created a collection of songs that towers over most others in this creativity-deficient hip hop landscape. Time will tell where this album stands in the annals of hip hop, but it is a noteworthy addition to Atmosphere’s rich legacy. When Life Gives You Lemons, You Paint that Shit Gold is a must have for anyone who enjoys intelligence, creativity, and emotion in their hip hop music.

View the music video for “Guarantees”: