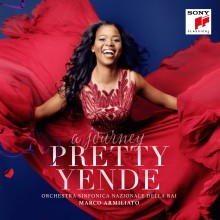 South African soprano Pretty Yende’s debut album, A Journey, will be released this month by Sony Classical.  Much-anticipated since her triumphant Metropolitan Opera debut in 2013, Ms. Yende’s album celebrates the lyric coloratura repertoire which propelled her to the top of the opera world.  She performs with the Orchestra Sinfonica Nazionale della RAI Torino, under conductor Marco Armiliato, with additional assistance from mezzo soprano Kate Aldrich, as seen in the album trailer below:

Ms. Yende was born in 1985 in the small remote town of Piet Retief, about three hundred miles from Johannesburg. At the age of sixteen, her life was transformed by hearing the “Flower Duet” from Delibes’s opera Lakmé on a British Airways television commercial.  On learning that this haunting music was opera, she decided at that moment to abandon her plans to become an accountant and train to become an opera singer instead.  Soon she gained a scholarship to study at the South African College of Music in Cape Town with Professor Virginia Davids, who was the first black woman to appear on opera stages during the apartheid years in South Africa.  With Davids’ help, Ms. Yende’s extraordinary talent blossomed and she was taken from a childhood in a remote village in South Africa to sing on the major opera stages of the world.

Preparing to enter the opera world from such a background cannot have been easy, but in interviews with the New York Times, Ms. Yende has referred to South Africa as “… a singing nation. Music is something that we are born with, it’s like the African rhythm; it’s like a heartbeat.  In Sunday school you will have to sing one song, and a little girl will start harmonizing it.  Just like that, just by hearing.  It’s that kind of world.”  Such innate musicality is showcased in Ms. Yende’s album, featuring as it does selections from the bel canto and later French repertoire.  Her voice boasts a solid lower middle register not always heard in this voice type, and in her upper range, a ringing squillando which she manages with taste.  Her ornamentation is fresh and well-chosen to highlight her strengths: while her runs are not always clean, her pizzicato coloratura is excellent.

Overall, the album provides a refreshing take on some old favorites, while providing some more unusual repertoire for the jaded palate. Among the latter is the scene “Vous que l’on dit” from Rossini’s Le Comte Ory.  It was in this opera that Ms. Yende starred opposite Juan Diego Flórez as the Countess Adèle, at her Met debut.  With less than a month’s notice (having never sung the role), she replaced an ailing Nino Machaidze to complete the run of the show.  She has since performed the role several times, including at the Theater an der Wien where she replaced Cecilia Bartoli.  The performance reflects her theatrical experiences, communicating a thorough command of the French text and musical line, bringing Adèle’s character brightly to life.  One can only imagine the riches in store for us as this rising star finds her place in the operatic firmament.