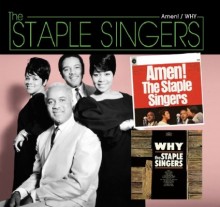 On this new two-for-one reissue, Real Gone Music makes available for the first time on CD the first two Staple Singers studio albums on Columbia’s Epic label, released just after the group left Orrin Keepnews’ Riverside label (which subsequently folded in 1964). Amen! was recorded in Chicago in October 1964 and was released in 1965, while Why, released the following year, was recorded primarily in Nashville.  Though these two albums marked an attempt to greatly expand the audience for the Staple Singers by utilizing the significant muscle of Columbia’s marketing department, they did not resort pop-oriented songs but chose to emphasized the sacred over the secular.  Both albums display the group’s church music roots, featuring Pops Staple’s updated arrangements of traditional religious songs and spirituals such as “Mary Don’t You Weep” and “If I Could Hear My Mother Pray.”

Noteable tracks on Amen! include Pops Staples’ “More Than a Hammer and Nail” (originally released in 1962 on Riverside), featuring the soulful voice of Mavis, and his “Do Something for Yourself” which presages their later hit “Respect Yourself.” Also included are two songs, “As an Eagle Stirreth Her Nest” and “My Jesus Is All,” by Rev. W. H. Brewster—the legendary Memphis-based gospel hitmaker. The album concludes with the title track “Amen” by Jester Hairston, popularized the previous year by the Staples’ fellow Chicagoans, The Impressions. Again, the Staples’ take a more traditional approach, retaining the marching beat of the snare drum and frequent key changes, but slowing the tempo significantly and, of course, dispensing with the somewhat over-the-top horn section.

The follow-up album opens with the title track, Why? (Am I Treated So Bad), a commentary on segregation and the Little Rock Nine which became a standard during the Civil Rights Movement (the Staple Singers later reissued the song using a rhythm section).   Other highlights include Pops’ arrangements of the traditional songs “(I’ve Been ‘Buked) I’ve Been Scorned” and “I’m Gonna Tell God (About My Troubles),” the uptempo “King of Kings,” the Pervis composed and sung “Step Aside,” and the closing song “Move Along Train” featuring Mavis in the lead with Cleotha singing back-up.

These two albums showcase the sound of the Staple Singers before they became ambassadors of the gospel soul era and fill in gaps on the recent 4-CD box set, Faith & Grace: A Family Journey 1953-1976.