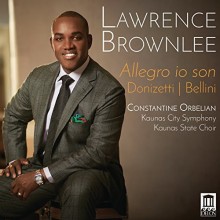 Right from the beginning, he sets the tone with the joyful title track from Donizetti’s late (and rarely performed) one-act comedy Rita (or The Beaten Husband), tossing off B-naturals and C-sharps like they were confetti.

In the selections from I puritani—what would be Bellini’s final work—Brownlee negotiates the unforgiving tessitura with unbelievably remarkable ease. In Arturo’s entrance, “A te o cara,” the tenor floats the long lines in the ensemble—with fine support from soprano Viktorija Miskunaite, bass Liudas Mikalauskas, and baritone Andrius Apsega—always maintaining the pulse, notwithstanding the slow tempo. Equally, in Arturo’s third act “Son salvo,” Brownlee conveys (as does Miskunaite) with directness and full-bodied tone.

The two selections from L’elisir d’amore also are delivered in a straightforward fashion, without resorting to sentimentality, perhaps showing us that Nemorino might be more than just a “country bumpkin.” In both, he adds a little bit of ornamentation as well as mini-cadenzas that never distract from the character’s heartfelt declarations of love.

The concluding two tracks are from one of Brownlee’s signature roles, Tonio in Donizetti’s La fille du regiment. The first selection, “Pour me rapprocher de Marie” is, according to the tenor “actually harder than ‘Ah, mes amis’—which you can sing if you have a solid high C—because it lies high overall and demands expressive phrasing.” He should know, because it is in this track, more so than any other on the disc, where Brownlee exhibits exactly why he is virtually peerless in this repertoire. Despite the slow tempo and flexible rubato, there is continuous forward motion even as he stretches the aria’s phrases to their limits, finally tossing off a C-sharp before floating a high A to pianissimo.

In the final track, Brownlee dives headfirst into “Ah! mes amis” from the opera’s first act. His earlier version on This Heart That Flutters with piano accompaniment (from 2013, reviewed here) may have had a little more urgency, but with support from the orchestra, Mikalauskas, and the men of the Kaunas State Choir, Brownlee takes his time and sounds much freer as a result. And all nine of those high Cs are as solid as ever.

Editor’s note: Lawrence Brownlee is an alumni of the Indiana University Jacobs School of Music, where he recevied his Master of Music degree.