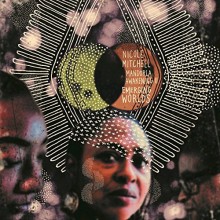 Flutist Nicole Mitchell leads her Black Earth Ensemble in the Afrofuturist inspired album Mandorla Awakening II: Emerging Worlds. Commissioned by Chicago’s Museum of Modern Contemporary Art (MCA) as part of their 2015 celebration of the 50th anniversary of the Association of the Advancement of Creative Musicians (AACM), this concert recording puts on full display the outstanding musicality and artistry of Mitchell and the members of the ensemble.

Based on the black speculative novella of the same name penned by Mitchell, Mandorla Awakening presents in sonic form the story of what happens when two citizens of the futuristic World Union venture beyond its borders and establish contact with the peoples of Mandorla, a society with different social values than their own. The theme of the novella and the album is inspired by anthropologist Riane Eisler’s influential book The Chalice and the Blade, in which she argues that societies arranged by cooperative of hierarchical governing models have been in competition with one another for centuries. Mitchell is not so much concerned with establishing a narrative of which society represents right or wrong, but rather proposes what societies in an oppositional duality can learn from each other if they can move beyond their differences and find commonalities.

The project relies on the originality of Mitchell’s score and the creativity of the musicians to present the work’s narrative. Unique to this project is the inclusion of Kojiro Umezaki on shakuhachi and Tatsu Aoki on bass, shamisen, and taiko. The infusion of Umezaki’s and Aoki’s playing provided moments of intriguing sonic textures both individually and in combination with other members of the Black Earth Ensemble that I found particularly enjoyable with a notable example happening in the opening of “Sub-mission.”

Joining the group for this project is Chicago-based spoken word artist and performer avery r. young, who animates Mitchell’s lyrics through his dynamic vocal inflections on three of the last four tracks. The lyrics in particular bring together the suite’s theme of competing approaches to life learning from one another. The string players, Tomeka Reid and Renée Baker, both standout soloists in their own right, provide colour and ethereal tones that enhance the works’ futuristic narrative and soundscape.

Other standout moments from the Black Earth Ensemble include JoVia Armstrong’s imaginative percussion playing in “Listening Embrace” and Alex Wing’s psychedelic infused guitar sounds on “TimeWrap.” Of course, one must call attention to the rich tone and fluidity of Mitchell’s playing that appears throughout the album. The penultimate track, “Mandorla Awakening” (which rightfully receives a handful of applause from the live audience), puts on full display everyone’s musical skill in a tightly woven ensemble setting.

Overall, this recording presents an accessible sonic entryway into the diverse musical world of the AACM and provides ample material for the listener to think through, both musically and intellectually.